Friday night will see Invicta FC make its debut on new broadcast home AXS TV (not to mention Fight Network in Canada), and it’s bringing along two title fights for the occasion.

Both the currently vacant flyweight title, as well as Alesha Zappitella’s strawweight belt, will be on the line Friday. For Invicta, it was the first card of the year, and very much a new era for the all-female fighting outfit.

In terms of star power, Zappitella may have been the biggest name on the card. And the 105lb title held a little more weight to it, perhaps, after Dana White said late last year that he had considered bringing a women’s atomweight division into the UFC. A win over Jessica Delboni would cement “Half Pint” as the face of the weight class.

In the main event, meanwhile, it was Karina Rodriguez and Daiana Torquato going at it for the Invicta FC flyweight championship, sitting vacant since Vanessa Porto signed with Bellator MMA last year.

Weigh-ins for Invicta FC: Rodriguez vs. Torquato went down Thursday, will all fighters save one hitting the mark for Friday’s show. Full results are below. 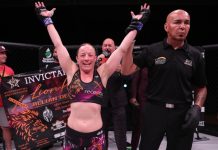 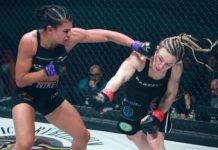