UFC 262 has come and gone, and the Houston card delivered when it mattered most.

Seven finishes adorned the PPV event, topped by a lightweight title fight between Charles Oliveira and Michael Chandler. Two of those came by way of technical submission, with one of the two picking up a Performance of the Night bonus.

That was awarded to card-opener Christos Giagos, who put the returning Sean Soriano to sleep by way of a D’arce choke. The end came early in the second round, and earned Giagos $75,000 — an extra 25K above the usual UFC post-fight bonuses. Promotion President Dana White had announced the one-night only pay bump earlier in the week.

The other technical submission on the night, which saw Andre Muniz break Jacare Souza’s arm, was not rewarded. Instead, the other Performance of the Night award went to new lightweight champion Charles Oliveira, who knocked out Michael Chandler early in the second round of the main event.

Appearing in his 28th UFC fight, Oliveira finally claimed gold in his first title shot, extending his win streak to nine in the process. The Brazilian, with the promotion over a decade, had the longest path to the belt of any fighter in UFC history.

Fight of the Night at UFC 262 was awarded to Edson Barboza vs. Shane Burgos. That featherweight affair was wildly entertaining for the better part of two plus rounds, until Barboza put “Hurricane” Burgos away early in the third with a punch. Burgos appeared to have a delayed reaction to the blow, initially eating it, only to stumble backwards moments later, eyes wide, before crashing to the canvas.

As with the Performance bonuses, Fight of the Night earned each man an extra $75,000 in Houston.

Attendance at the Toyota Center came in at 16,005, with a gate of $4.11 million for the promotion’s second card back with fans. 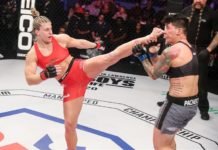