A pair of UFC featherweights will look to get back into the win column in August.

The Entre Rounds Podcast was the first to report the news that Kevin Croom will fight Marcelo Rojo on August 28 at a yet-to-be-announced UFC event. Both fighters would subsequently confirm the booking on social media.

Croom (21-13) had his four-fight win streak snapped in February when he lost a lopsided unanimous decision to UFC vet Alex Caceres. Before his first UFC loss, “Crash” burst onto the scene submitting Roosevelt Roberts in 31 seconds in his UFC debut, earning Performance of the Night. The fight would be overturned to a no-contest because of a positive marijuana drug test.

Rojo (16-7) made his UFC debut on short notice against Charles Jourdain in March. The pair would put on an amazing fight which would get robbed of Fight of the Night honors. Rojo would end up finished in the third round. The long-time Combate fighter will be looking to get his first UFC win and continue his 13-fight finish streak going. “Pitbull” will also be looking to do his infamous velociraptor celebration. 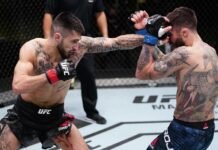 Welcome to the UFC: Marcelo Rojo