Derrick Lewis is likely to get the next heavyweight title fight in the UFC, because Jon Jones has priced himself out of the bout.

That’s according to UFC President Dana White, who revealed to The Ringer ahead of this weekend’s UFC 261 that Jones was looking for $30 million to fight new heavyweight champ Francis Ngannou.

“He’s talking he wants $30 million guaranteed,” White said, who went on to suggest that Jones could come close, but only via PPV dollars. “The way that this works is these guys all share in the pay-per-view, so you just said yourself you think that this is gonna be a big fight. I agree with you and think it’s gonna be a big fight, well he will share in the profits of the fight. That’s how it works. That’s how you run a business and you don’t go broke, that’s how that works.”

The idea of a showdown between Jones and Ngannou first arose last year. Talks quickly fizzled when the UFC was unwilling to meet Jones’ financial demands. Jones, who vacated the promotion’s light heavyweight title last year, focused on a move to heavyweight regardless. With Ngannou defeating Stipe Miocic to win the title last month, talk of a Jones heavyweight title bid arose once again.

And once again, the sticking point seems to come down to money. Jones has been vocal on social media in recent weeks about being paid his worth, and has engaged in some back-and-forth with the UFC President.

With Jones seemingly pricing himself out of the market, however, Derrick Lewis may be the man to cash in.

Of course, Lewis’ first fight with Ngannou is widely regarded as one of the worst high-level heavyweight fights of all time. A fight with little action that drastically failed to live up to the hype. Hopefully things will change the second time around, unless the UFC can come to terms with Jones. 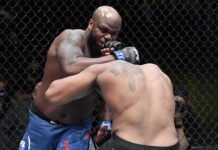