Valentina Shevchenko is looking to turn her resume into that of an all-time great, but powerhouse Jessica Andrade seeks a world title in a second weight class at UFC 261.

When we talk precision, we're talking about @BulletValentina 🏆 #UFC261 pic.twitter.com/HriGMBQBer

Were Dos Equis ever to remake their famous commercials with a woman, she would not be as fascinating as Valentina Shevchenko.  The Most Interesting Woman in MMA has unabashedly branded herself as the multi-layered world beater en route to becoming one of the best fighters of the past several years.  Is she a spy?  No.  But the fact that she seems to qualify for the job should tell you all you need to know about the extent of her extracurricular activities.  Inside the cage, “Bullet” has a 20-3 record and has defended the flyweight title four times.  She avenged one of her setbacks (against Liz Carmouche) in dominant fashion and her loss to Amanda Nunes in 2017 remains a controversial decision that many feel is the only loss “The Lioness” has suffered since ascending to the elite level.

And yet, Shevchenko has been relegated to third from the top on Saturday despite the fact that she is a longer reigning champion and is in arguably the most dangerous fight of her reign.  She has headlined only three UFC events, and never a pay-per-view.  Whether Saturday will be her breakthrough into mainstream popularity is uncertain.  But by the numbers, a fifth title defense would put her in elite company and within striking distance of historic numbers that would cement her as an all-time great.

SHE'S COMING FOR THE BELT 🏆

🇧🇷 @JessicaMMAPro stops the No. 1 contender in ONE ROUND.

[ Main event next on #ESPNPlus ] pic.twitter.com/WTpWE2lSlD

Despite being in the shadow of some of the best to ever compete at 115 pounds, Jessica Andrade knows what it’s like to have her moment in the sun.  While the last few years at strawweight have been dominated by Joanna Jędrzejczyk, Zhang Weilli, and Rose Namajunas, Andrade has been one of the most consistent performers at strawweight with her only losses in recent years having come to the other women who held UFC gold.  A veteran of the Octagon since 2013, Andrade already has names like Namajunas, Claudia Gadelha, Joanne Calderwood, and Karolina Kowalkiewicz on her resume.

Adding Shevchenko to the list will be a monumental task.  But, Andrade comes in as one of the most decorated challenger that the reigning champion has ever faced.  “Bate Estaca” has amongst the most fights by any female in UFC history and held 115lb gold briefly in 2019.  Stylistically, she carries the most firepower seen by a Shevchenko opponent since Amanda Nunes in 2018.  Should she triumph Saturday, it would automatically put her in rarified company as only the second woman to ever hold UFC titles in two different weight classes.

Stylistically, Andrade must use a multi-faceted attack to overwhelm the bigger and more technically proficient Shevchenko.  Masking takedown attempts with her boxing and chopping away with kicks will help to keep the champion from settling into her rhythm on the feet where she has gotten the better of all of her opponents over the past several years. By comparison, Shevchenko should look to be patient and counter Andrade in the center of the Octagon or use her size to initiate the clinch and slowly wear down the challenger’s gas tank.

What a night! Our first of THREE title fights!

Should Zhang Weilli prevail on Saturday night, a fight with Shevchenko in a champion versus champion collision is expected to be next if “Bullet” prevails.  An Andrade victory would likely set up an immediate rematch considering the length of Shevchenko’s dominance.  If neither scenario were to come to pass, the upcoming bout between Lauren Murphy and Joanne Calderwood figures to provide the next title challenger. 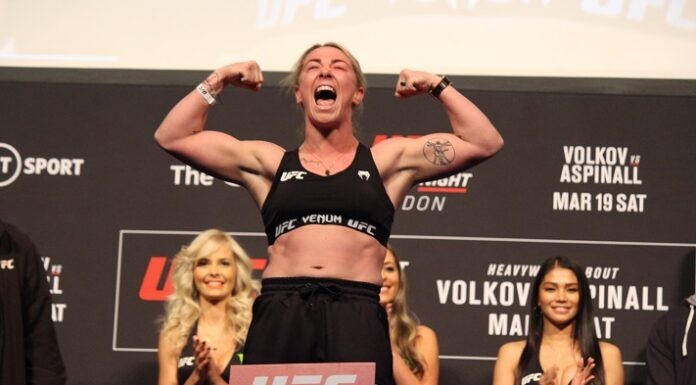