Valentina Shevchenko is someone for whom marital arts is not just a profession, but a way of life. She embodies everything that’s so positive about martial arts in the way she conducts herself inside and outside of competition.  She’s respectful, always objective and honest, and shows that she cares about the growth of her division and women’s MMA in general.

She is a big name in this sport for good reason. Shevchenko beat one of the other biggest female names in this sport Joanna Jedrzejczyk for the flyweight title and has since defended that throne four times. While she is a big name in the sport already, she is capable of breaking through to a new stratosphere of fame and notoriety in this game. As time goes on, the realization of how special of a fighter she is will become widely recognized amongst the fanbase a lot more than it is already.
With a victory at UFC 261, Shevencheko will continue her ascension to becoming one of the biggest names this sport of mixed martial arts has to offer. But that will take her through her toughest opponent, arguably, to date — former strawweight champion and bantamweight contender Jessica Andrade, who recently arrived in her third weight class in the UFC with a bang.
Check out the video above for our full preview of the women’s flyweight title fight at UFC 261. 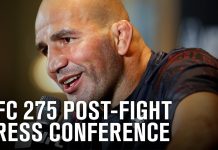