Poland’s Marcin Held is one of several names debuting with the PFL this season. In Held’s case, the 29-year old lightweight, formerly of Bellator MMA and the UFC, is getting multi-time lightweight champ Natan Schulte right out of the gate.

“I was really happy about it. I know he’s really good, but I like tough opponents, I like to fight with a good guy,” stated Held (26-7) during the PFL 1 media day. Tough opponents are something Held, who began his professional MMA career in 2008 at the age of just 16, has been facing for a long time. “I don’t feel big pressure; I like to be an underdog. This fight, it’s good for me.”

Held is also a fan of the tournament format, and for good reason. For one thing, he’s a previous winner of one of Bellator’s tournaments, their season 10 tournament in 2014. For another, “I really like it, because I like to have fights close to each other. I don’t like to have a big break,” he said.

“In Bellator and here, when you are prepared good, it’s enough to come back to the gym and keep this high level. You don’t have to make a training camp again and again and again,” Held continued. “When you are in good shape, just keep it for a longer time, and you can do three, four, five fights.”

Held fought in a one-night tournament early in his career, as well as in multiple Bellator tournaments. It’s not entirely an advantage, because outside of fellow newcomer Anthony Pettis, “a lot of guys in my category was fighting in the last season. So they also had experience in this format, they were fighting in PFL before,” Held observed. “So I don’t think it would be my advantage, but I know I feel good in it. I feel good to be in a tournament, so it’s not a disadvantage for me.” 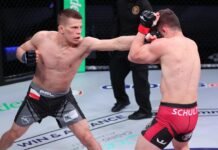 PFL 1: Marcin Held On Showing He’s A Complete MMA Fighter Against Best in the Division 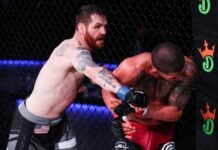 PFL 1 Results: Clay Collard’s Boxing All the Difference in Win Over Anthony Pettis