A pair of lightweight contenders will collide at June’s UFC 263 pay-per-view.

MMA Junkie was the first to report the news that Drew Dober will face Brad Riddell on June 12 at UFC 263. Cageside Press confirmed the booking with a source close to the situation on Sunday.

Dober (23-10) had his three-fight win streak snapped last month at UFC 259, when he was manhandled by Islam Makhachev and eventually submitted in round three. Before his loss at UFC 259, he had back-to-back Performance of the Night knockouts of Alexander Hernandez and Nasrat Haqparast. Dober will try to get back into the lightweight rankings where he sat last year.

Riddell (9-1) was supposed to fight Gregor Gillespie in the co-main event of the Brunson vs. Holland card last month; however, on the day of the event, Riddell was pulled from the fight due to COVID-19 protocols. The New Zealand native is riding a six-fight win streak with four of them coming in the UFC. Riddel went 2-0 last year with wins over Magomed Mustafaev and his most recent Alex da Silva, which took place at UFC 253 on ‘Fight Island.’ A win over Dober could very well get him into the top 15 lightweight rankings.

UFC 263 takes place June 12, 2021. While no official location or venue has been announced for the PPV card, the following fights have been reported: 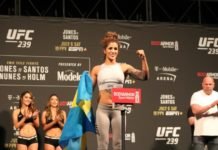 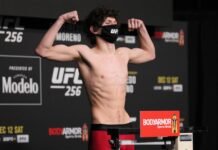 Chase Hooper vs. Steven Peterson Lined Up for UFC 263