Lance Gibson Jr. got arguably his toughest test yet at Bellator 257, but the Canadian lightweight walked away with his undefeated record intact.

“I felt as good as I could today. It wasn’t my best performance, I had a few ups and downs in there, but I worked through it, and got the win,” Gibson (4-0) told media outlets including Cageside Press following his unanimous decision win over Saul Rogers. “So I’m happy with that.”

Among the trials and tribulations Gibson underwent at Bellator 257 was an eye poke, that left him unable to see out of one eye for the full five minutes of recovery time. Even after the fight, things were “definitely blurry out of my left eye. I can see you clearly out of my right,” he told one reporter in attendance. “The left is a little bit funny, but it’s all good, it’s part of the game.”

Gibson had a definite air of dissatisfaction about him despite getting the win. For one thing, he was unhappy at not securing the finish. “I’m going to recover obviously, get back in there, work on some stuff that I know I need to improve from just this experience right now,” he stated. “I’m already picking it apart. That’s what makes me great and that’s what’s going to make me great in future is, I can pick myself apart, right after, get over it, get better, and get back in there.”

During the broadcast, Bellator analyst and former ref Big John McCarthy suggested that some adversity might actually be best for Gibson. Following the bout, Gibson agreed with that assessment. “Absolutely. It’s adversity. Adversity either makes you better or worse. It depends on how you pick at it and how you take it,” he said. “I can sit there and cry about Big John saying that it’s good for me to get this adversity, or I can sit there and get better from it. And I understand that, and I know that as a martial artist. So I’m going to improve from it, and go forward from there.” 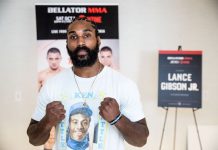 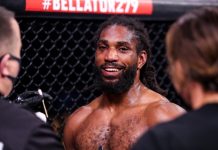 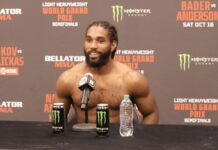