Dalton Rosta is one of the most impressive middleweight prospects in mixed martial arts today. Rosta earned his fifth victory Friday at Bellator 256, over a boxing vet, and the “wrestler” out-struck his opponent all three rounds. Before the fight, Rosta believed he was already top 10 material, and after this latest performance the rankings could feature the 25 year old.

“I knew I had to box with him,” Rosta told media outlets including Cageside Press following the bout. “People seem to forget I have a boxing background myself. I think there was a big speed advantage in there for me,” Rosta continued. “The goal is always to go in there and get the finish, he was laying back and picking his shots, turned it into a point match.”

Currently ranked at #9 in the division, and a former foe of Rosta (the fight never made it to fight night), Romero Cotton is a name Rosta is intrigued by. In a previous interview with Cageside Press, Rosta stated he was above Romero, but with the ranking system in place, Rosta wants Romero’s top 10 spot.

“Romero Cotton shouldn’t be ranked,” Rosta explained. “He’s 5-0 but only fought one solid competition. Four wins against no name guys. He should be knocked out of the rankings, or I should be nine and he should be ten. Speaking of, that is who I want to call out,” Rosta continued. “He’s ranked #9, that is an easy win for me.”

Rich Chou, the Bellator matchmaker walked by as Rosta was speaking with the media. Rosta made it very known he’d like Romero Cotton next, and even asked Chou how many times he’d be fighting this year. If Rosta has it his way, we will see him in a plethora of fights in 2021. 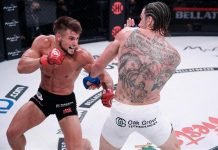