Las Vegas, NV — It’s not hyperbole to say that Vicente Luque captured the biggest win of his career at UFC 260.

Long a promising contender in the UFC’s welterweight division, Luque earned a submission win against former champ Tyron Woodley. The fight was a wild one, with Luque rocked early — admitting post-fight that it left him seeing three of his opponent, on unsteady legs. The Brazilian struck back, however, wobbling Woodley before locking in a D’arce choke, forcing the tap.

“I’ve been envisioning this for a while,” Luque said following the win, speaking to media outlets including Cageside Press. “Training camp has been going great. I visualized this win, but actually coming here, having the fight, winning the fight, it’s much better than I expected.”

Luque acknowledged the strong start of his opponent. “[Woodley] really started real strong, and I expected it,” revealed Luque. “It’s crazy, whenever somebody is going to fight me, I always get the best out of those guy. I don’t know if it’s my style, and they know that I’m going to go in there and try to knock them out and submit them every single minute of the fight. But for some reason, I always get the best version of every fighter. And I’m good with that,” continued Luque, who explained that it never allows him to underestimate his opponents.

After the victory, Luque called out Nate Diaz — but later Saturday night, he revealed that he actually wanted another fight.

“The fight I really wanted, Kamaru [Usman, UFC welterweight champion] took it. I wanted to fight Masvidal.” Why Masvidal? The motivation is similar to his reason for calling out Diaz. “I think that fight would be a banger, our styles match up really good. That’s why I also called out Nate Diaz. I think our styles match up perfectly. If he’s interested in coming out of retirement, I’ll not fight a top five to fight him. But my focus is on the top of the division. I don’t know. Leon Edwards, Wonderboy, two guys that beat me— I would love those rematches.” 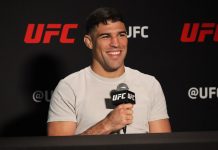