With no fewer than four standout prospects on their card this week, ACA leads the way with up-and-coming MMA talent. Brave CF, LFA, and more are in action as well. Here’s a look at the action to come.

Saint-Denis is an undefeated fighter from France that has done quite well for himself in the Brave CF promotion. He’s more of a wrestler/grappler; while he does throw a lot on the feet he is just a little sluggish. Saint-Denis is a solid wrestler though and that’s his main go-to. One drawback, he’s a bit too comfortable going to his back. With that said he does a good job creating space and getting out from underneath. His grappling is arguably his best weapon. He can be a little over-aggressive but winning by four different submissions he’s always dangerous. He fights Luan Santiago (15-4) which is a tough fight.

Worldwide, Mokaev is one of the prospects with the most hype. Mokaev has an outstanding amateur career going 23-0 and was a four-time IMMAF gold medalist. The young 20-year-old has looked stellar and dominant. Mokaev has excellent wrestling and is very skilled on the mat. His positional grappling and ground and pound are very good. On the feet, he has a nice flow with his kicks and mixes in strikes and kicks together very well. Mokaev is extremely well-rounded and I see no flaws in him yet. He fights Abdul Hussein (7-1).

Hussein won the 2016 IMMAF world championship gold medal in the bantamweight division. He is well-rounded being dangerous both on the feet and on the mat. On the feet, he will need to tuck his chin better and keep his hands up higher, mind you. He really picks his shots on the feet being very conservative with his energy but has good accuracy with everything he throws, mixing it up well. Hussein is a decent wrestler but his work on the mat is better as he has good jiu-jitsu and some brutal elbows in his ground and pound. He fights Muhammad Mokaev (4-0).

Sopai is a product out of Allstars Gym Sweden which is a fantastic team. Crazy enough, Sopai is only 20-years-old and a complete fighter already. On the feet, he has a Muay Thai background. The Albanian is a solid striker with excellent kicks and slick short combinations. He doesn’t really have knockout power but does throw a lot of volume and gives a lot of different looks. I’ve been impressed with the wrestling from the setups, speed, and his ability to slam guys to the mat. Sopai has three wins by submission and overall his grappling could be where he’s best at. This kid is a major problem with a bright future. He fights Francesco Nuzzi (8-1).

Nuzzi is an unknown prospect from Italy and is one of the country’s brightest up-and-comers. After his first five fights (as a pro and amateur) he was only 2-3. Now Nuzzi has won his last seven fights winning a regional title along the way. From a technical standpoint, his stance kind of resembles Stephen Thompson’s, keeping his opponent guessing what his next move will be and counter-striking with precision. Unlike “Wonderboy,” though, he’s not afraid to move forward, looking for an opening to put somebody to sleep. “The Berserker” is constantly improving on his wrestling while on the ground he’s getting close to being a polished product. He fights Bernardo Sopai (8-1).

Aliskerov is a two-time world combat sambo champion out of Makhachkala, Russia, along with other accomplishments. From what I’ve seen from Aliskerov, while he has the wrestling background, he likes to stand and trade with his opponents. He has a good jab along with some impressive accuracy and timing on both his strikes and level changes. A lot is still unknown about him, but with the power, speed, and accuracy he shows on the feet while being an accomplished wrestler, I like his future. He fights Miro Jurković (13-3).

There isn’t a lot of fight footage out there on Pasquali but on what’s available I’ve been personally impressed. He has a really good jab and a right he throws behind it. He does get hit a lot but has proved to have a good chin. Outside of being a dangerous striker he does have fair wrestling and knows what he’s doing on the mat. It seems as though he does need to work on his cardio, which is perhaps his biggest flaw. Still green but a lot of talent. He fights Luca Marzioni (2-1).

There isn’t a lot of footage on Sudolski but there is some hype behind him. With an impressive record of 8-0 he’s got the fight done on the feet and on the mat. It seems like his grappling is his strong suit. He has some stopping power in his hands as well. Still, a lot needs to be seen here — but he seems solid. He fights former UFC fighter Joachim Christensen (15-8).

Smielowski is a highlight-reel fighter. He has a 100% finish rate with 5 KO/TKOs and two submissions. Among those wins, he has finished with a bulldog choke, a flying knee, and a head kick. Smielowski, being a tall, rangy fighter, is a solid kickboxer. And while he can be technical, he’s a showman, throwing caution to the wind always looking for the kill shot. His takedown defense does need work but even off his back he’s shown to be at least promising. Smielowski does have improved grappling and at only 24 he has a high ceiling. He fights Krzysztof Gutowski (8-0).

Froes is solid all around. In his stand-up, he throws a lot of kicks to keep distance but his hands are where it’s at. Froes has a very nice straight right hand that he lands more than anything but still throws with both. His wrestling is good as he can get the double leg or the trip in the clinch. On the mat, he has good ground and pound and is excellent at taking the back. He is always the one in control, the only thing he needs to work on is his takedown defense. He fights Magomedrasul Khasbulaev (32-8).

Tumenov is a high-caliber striker/boxer. Tumenov is an in your face pressure fighter who throws nothing but fire in his hands. The left straight/hook, left hook to the body, left uppercut, and the jab is all money. He’s incredibly dangerous with both hands even though his left hand is his lead hand. Tumenov is never gun-shy; he is constantly letting his hands fly with combinations. He’s really good at cutting opponents off and landing strikes while headhunting. He’ll headhunt quite often but his bodywork and mid combinations do quite a number on his foes. Tumenov compliments his striking with wonderful head movement slipping and returning. As a striker Tumenov is high-level. He fights Islam Omarov (9-0).

Omarov is an undefeated Russian that is all action from start to finish. He’s an excellent wrestler and he strikes well to wrestle. He’s always moving and always throwing to break his opponents down. Omarov has a solid gas tank and with the constant forward pressure, it’s very impressive. He fights Bibert Tumenov (10-1).

Magomedov has only been competing in MMA for a few years but prior to that, he had experience in Combat Sambo. In his first fight as an amateur, he suffered his only defeat in MMA. That loss was to current UFC contender Magomed Ankalaev. Magomedov went on to have a successful amateur career winning the WMMAA 2018 European Championship. In only his fifth pro bout, he dominated former UFC fighter Chris Camozzi. Despite not offering much on the feet, Magomed is an excellent wrestler. His timing on his shots is fine and the way he shoots so low makes his execution near-perfect. The work he does on top is his best aspect. He has a good top position and his ground and pound is strong, active, and lands hard. He fights Leonardo Silva (17-4).

Garcia is a product out of Fortis MMA, which has become a top camp. Garcia is primarily a wrestler whose stand up has improved, especially his boxing. He’s got solid wrestling and heavy top control. Once he gets the takedown with his heavy top control he can also easily takes the back. He holds three rear-naked choke victories in his career. Strong wrestling, good grappling, has a good pace, and improving striking. Garcia is someone to watch out for. He fights Isaiah Batin-Gonzalez (4-1).

Josh Quinlan only has four pro fights but did go 6-0 as an amateur. As an amateur, Quinlan was the Real MMA and the Tuff-N-Uff welterweight champion. Quinlan is a good striker throwing a lot of heat. He throws chopping leg kicks and has very clean hands. “The Renegade” is a prospect to watch for this year. He fights Dallas Jennings (3-1).

Miranda started off his career at 0-2 but has hit his stride and won his next seven fights. Miranda utilizes a lot of feints/twitches to keep his opponents guessing. “Monstro” has solid hand speed, often firing right down the middle. He also throws some heavy kicks mixing it up well. He tends to get drawn into brawls and he’s just relentless with his hands. He fights José Rodrigo Guelke (22-19-1).

Basharat is an excellent prospect to keep an eye on but the competition he has beat has been lackluster. Basharat is well-rounded as he has finished from both on the feet and off the mat. His footwork is quite advanced; the way he cuts angles and moves side to side is perfectly done and if I’m not mistaken he has a background in taekwondo. Basharat isn’t just a flashy striker he is also an excellent wrestler that has a strong submission game and does a great job at creating space and landing big ground and pound. He fights Luca Iovine (16-6). 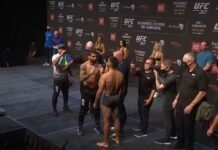 Welcome to the UFC: Benoit Saint-Denis