Las Vegas, NV — When he returns to action at UFC 260 this Saturday, Sean O’Malley will be entering his fight against Thomas Almeida from a different perspective. For the first time in his career, O’Malley is coming off a loss. Not that he’s ready to admit it.

O’Malley (12-1) has steadfastly refused to accept his defeat to Chito Vera, proclaiming that he remains unbeaten. Undefeated, especially mentally. He doubled down on those statements at the UFC 260 media day on Wednesday, ahead of his return fight against Almeida.

The “Suga Show” fighter has been asked about his “undefeated” comments repeatedly. “They ask me how I feel, I say I feel undefeated, I don’t feel like I was beat because my skill set wasn’t as good as his,” O’Malley explained, speaking to media outlets including Cageside Press. “It was a freak accident. How many leg kicks have been thrown since that kick to now, and how many times has that happened?”

What happened was an O’Malley leg injury, later diagnosed as “drop foot” due to damage to the common fibular nerve. Of course, that injury came as the result of a Vera kick, but that hasn’t changed O’Malley’s stance.

“If he would have said, ‘I’m going to go in there and kick that nerve,’ and that happened, I would have been like ‘damn, this motherf*cker’s good.’ And he is good. Chito’s a good opponent,” O’Malley continued. “But I think that the way that fight ended, and watching the fight before that happened, I was in control of that fight. I was doing what I wanted. He didn’t take me down and elbow me, my leg completely gave out. I rolled my ankle four or five times, and I was still piecing him up on the feet. I backed him down, had him covered up, I went to step back and my ankle gave out. If he would have beat me at a decision, or just any other way than me getting injured, I would say I’m 12-1 no issue. I don’t have a problem with losing, I lose in the gym all the time.”

One of these days, admitted O’Malley, “I’m going to lose a fight. Hopefully not in that kind of fashion. And it’s going to be like ‘yeah he beat me.’ I have no problem losing. I think the whole 12-1 mentally undefeated has gotten a little crazy, but I do kind of enjoy when people get mad at it now.”

Asked if he’d do anything different this time out in terms of ankle wrapes, O’Malley later added that “I don’t like sitting up here saying excuses, excuses.” That said, O’Malley added that he felt his wraps were tight in the Vera fight — and this time out, while he’ll wrap them again, it won’t be as tight.

Following the loss, O’Malley admits that there was an uptick in the hate directed at him online. Notably on streaming platform Twitch. And while he’s not accustomed to it, the 26-year old has taken it in stride. “People that are doing that, they’re probably dealing with some stuff mentally. There’s not anybody that’s doing real good in life that’s coming on there talking sh*t.”

Which isn’t to say he’s totally immune to the negativity. “It would be nice to go out there and prove to the stupid people that they are stupid. I think that people that understand skills look at me, see what I’ve done, and go ‘he’s legitimate. He’s got legit skills.'” Others might think his last few fights were luck. “I think I’m a high-level striker, high level MMA fighter, and I get to go prove that.”

“For the rest of my career, there’s going to be haters. Usually that means you’re doing something right,” O’Malley later noted.

Sean O’Malley faces Thomas Almeida at UFC 260 on Saturday, March 27 at the UFC Apex in Las Vegas, Nevada. You can view his full media day scrum above. 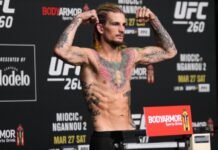