The Japan MMA Official Committee (JMOC), which oversees RIZIN FF and other promotions in the country, has announced penalties for the post-fight brawl following Tsuyoshi Sudario vs. Kazushi Miyamoto at RIZIN 27. Earlier today, RIZIN announced that Sudario had been penalized as per the sanctioning body for Sunday’s card.

The sanctions didn’t end with Sudario however.

Rizin 27 kicked off the year for Rizin FF in a big way. Sudario was a large part of that, scoring a promotional record-setting six second knockout in his bout with Miyamoto. But while the history-making nature of Sudario’s stoppage is exemplary, that fight was somewhat clouded by the chaos afterward.

Chaos ensued after Sudario’s record setting finish, when he failed to cease his attack after the referee had waved off the fight. Sudario’s corner, Enson Inoue, then entered the ring to restrain him. Miyamoto’s corner, Noboru Uchida, also entered the ring, and pushed Sudario — which led to Inoue shoving Uchida, and putting his hand on Uchida’s neck. Luckily, RIZIN officials were then able to break up the melee.

JMOC addressed the regulatory breaching of all involved in the post-bout melee. Per a RIZIN press release on Tuesday, the following penalties have been dished out to the parties involved:

Tsuyoshi Sudario – Red corner Received a Red card / Results in a 25% pay cut. Penalty detail: Disobeying the official by continuous blows to his opponent. After the referee had officially stopped the fight. (Article25-27,28)

Article 25: Fouls (27) Attacking the opponent after the bell.

Article 26: Execution of penalties given before and after the fight (2) Penalties such as point deductions and disqualifications. Which hold the same effect as during the fight, may be given at any time. Before the fight, in the locker room, or when Fighters refuse to listen to the Sanctioning Officials.

Article 28: Imposing Penalties (1) The penalty deductions from yellow cards will be the following: ii. One red card. Penalty of 25% deduction from contracted show money.

Article 29: Cornermen (11) Corners must refrain from using aggressive, abusive language and must not make physical contact with the Officials.

(13) If Corners and/or Fighter-related personals continue to disobey the Official’s commands. Regardless of location, Fighter may be penalized with a yellow card or red card. Which will take effect to the Fighter’s pay in the same way during a fight. 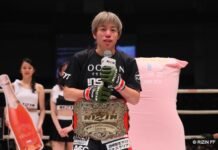 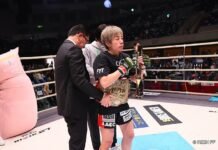 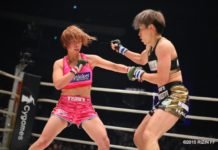