RIZIN Fighting Federation hosted its first event of 2020 on Sunday. Going down in Nagoya, Aichi Prefecture, the RIZIN 27 card was topped by a title fight rematch between super atomweight champ Ayaka Hamasaki and Kanna Asakura.

The pair had first met in 2018, in the inaugural super atomweight title fight at RIZIN 14. Hamasaki, a former Invicta FC champ, won the belt, submitting Asakura via arm-bar. The now 23-year old Asakura was looking for her revenge on Sunday, having won her past four fights to earn another chance at gold. Hamasaki, meanwhile, defended the title once, lost the belt to Seo Hee Ham, and regained the belt on New Year’s Eve at RIZIN 26.

RIZIN 27 gets underway at 1AM ET on Sunday, March 20. The English language live stream is available at Live Now. Results can be found below.

* Sakurai missed weight. He will not be eligible to win the bout; should he earn the win, the result will be ruled a no contest 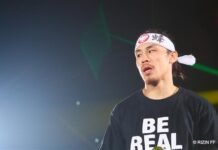