Julija Stoliarenko gave onlookers a scare when she fainted twice during Friday’s UFC Vegas 22 weigh-in, once prior to, and once after making weight. Luckily, the bantamweight is feeling better, and on Saturday, the Lithuanian fighter released a statement addressing the matter, and thanking those concerned about her health.

Stoliarenko also stated that she believed the weight cut itself wasn’t necessarily the issue. At least, not the amount of weight she cut — just the timing of it.

Speaking in a video posted to social media, Stoliarenko explained that “The problem wasn’t my weight cut and so on. Actually I want to say that it was one of the easiest weight cuts in my career, and weight was dropping too fast.” Instead, she continued, “the main issue I think was I made weight too early. Basically, weigh-in starts an 9AM, and I was already on weight at 5AM. I was just on weight too long a time, and everybody knows when you cut weight, you cannot be on this weight for too long, because you’re already on the limits of your dehydration and so on. That was an issue, why it all happened.”

Stoliarenko did make weight on Friday, weighing in at 135.5lbs after her initial collapse. However, she buckled again getting off the scale, and was escorted out of the weigh-in room on a stretcher, with paramedics in attendance.

“I’m so upset because right now, I’m feeling great. I’m actually feeling ready for a fight. My body feels great, I’m still in good shape, I know that I can fight,” exclaimed Stoliarenko. “It just so happened that the athletic commission did not clear me for the fight, because they are taking care of the fighters. Of course that situation looked terrible. And the UFC is also taking care of the fighters.”

Stolianrenko apologized to both the UFC and opponent Julia Avila for the incident, and expressed her hope that they could meet in future. “I was so ready for that fight, I was in such good shape, and I’m so upset that I cannot show people that I prepared for this fight. I really hope in the future, you’re going to see me in the UFC, fighting again, and I just want to say sorry for all that situation. And thank you for everybody who worried about my health.”

Aside from the concern over Stoliarenko’s health, which was first and foremost, the incident also raised concern about the athletic commission’s handling of the a clearly unsteady fighter. In particular, why they allowed her back on the scale after her initial collapse. However, the good news is that it Julija Stoliarenko appears to have avoided any serious consequences to her health.

Stoliarenko (9-4-2) last competed in August 2020, losing a unanimous decision to Yana Kunitskaya in her return to the UFC octagon. One fight prior, she had captured the Invicta FC bantamweight championship, winning a split decision against Lisa Verzosa. 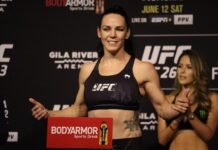 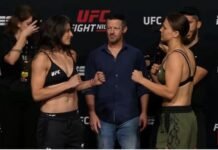