The biggest story coming out of UFC Vegas 21 was the eye poke heard ’round the world. Dana White found the most gruesome picture of the poke (or pull, if you’re focused on the eye lid), and plastered every social media account with it. However, while it might be expected that Belal Muhammad would be facing a long layoff, the injury actually only requires a 30 day medical suspension. While the suspected corneal abrasion would make it such that Muhammad would have little to no chance at continuing, he may be able to get back in there faster than some of the others on the card.

One of those others facing a longer layoff is Marcelo Rojo, who participated in an absolute war with Charles Jourdain. He clearly came out of the bout worse for the wear as the commission issued him a 180 day suspension due to suspected fractures in his face. He can, like most lengthy suspensions, see that number go down with a clear bill of health and some x-rays. Others receiving that same length included Ashley Yoder, Nasrat Haqparast, Rafa Garcia, and Cortney Casey.

Full list of medical suspensions from UFC Vegas 21 is as follows: 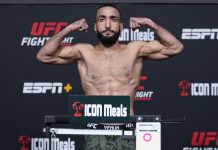