His last fight was a wild brawl with Johnny Walker, and Ryan Spann would have done at least one thing differently. “Not go to sleep in the middle of it. That would have helped a lot.”

Speaking to Cageside Press at this week’s UFC Vegas 21 virtual media day — the former LFA champ faces Misha Cirkunov in the co-main event Saturday night — Spann revealed one particular area he focused on after that fight.

“When I went back [to the gym] we focused more on getting my cardio back in shape,” he told us. “We had some things to deal with outside, so it was a lot of mental work too. We worked on all the aspects, as far as physical skill and mental [preparation]. But I know we did put a heavy emphasis on our cardio and building with Mike Scaccia, my strength and conditioning coach.”

He’ll put that cardio to work against Misha Cirkunov shortly. What does Cirkunov bring to the table? “No clue,” said Spann, who claimed he hadn’t watched his opponent. But he is happy to get back to work.

“I’m super excited about getting back in there and doing it again.” Especially, he said, after fights with Cirkunov fell through on more than one occasion.

Turning his focus to the light heavyweight division as a whole, Spann also talked about the current shift 205 has been going through. “Younger guys coming in and making a name for ourselves. I think we’re the only 205’ers on the card, and in the co-main event spot. We get to start building the glamour back into the division,” said Spann. Since Jon [Jones] left, there’s the old heads that have been kind of lurking in the top five and whatnot, starting to take over and take shots at the belt. But the younger guys are going to take over and do what we do.” 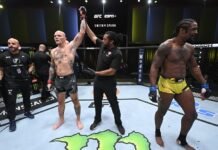