Las Vegas, Nevada — After winning a hard-fought split decision against Casey Kenney at UFC 259, former bantamweight champ Dominick Cruz called out his next opponent. A man most fight fans have never heard of, Hans Molenkamp.

Molenkamp is a Monster Energy employee. Cruz called the generally unknown exec out for a charity bout, after claiming during his post-fight interview with Joe Rogan that Molenkamp “has been holding a lot of fighters hostage, and saying he’s an awesome pro fighter and that he can take out everybody.”

Cruz went on to suggest that “how bout we do something for charity? He’s got a 100 pound advantage, and I think we could put on a good show for charity and make a lot of money for them. He’s been forcing us to comment on his photos, forcing us to do videos and pictures with him, just in order to hold our contracts hostage. So let’s see you put your money where your mouth is, Hans.”

Molenkamp’s social media accounts are littered with photos of him and UFC stars, including Conor McGregor, Max Holloway, and Michael Chandler. He also posted a rather bizarre video of Dominick Cruz, with audio from Talladega Nights dubbed over Cruz speaking.

Following his win at UFC 259, speaking to media outlets including Cageside Press backstage at the UFC Apex, Cruz further explained his callout of Molenkamp.

“You know he’ll probably love that he’s getting plugged like this to be honest. It’s a benefit for him, so he can thank me,” Cruz began. We’re in a day and age, he continued, where taking a photo with Conor McGregor makes you Conor McGregor’s friend.

“If I can take a picture with Dominick Cruz and have him commenting on my page, we’re in a day and age where that looks like we’re friends. Well, I may be your friend, but you can’t use me in order to get clout, as they put it,” stated Cruz. “I’m not here to be used. I work very hard. Look at my face, look at my body. I get beat to death for a living.”

“So when you try to force me, and you text me, that if I don’t comment on your page, if I don’t give you an interview, that you’re going to take what pays my bills— what are we doing? Monster sponsors me, not you,” added Cruz, getting the core of the issue. “So this was a callout because he calls himself a pro fighter. He’s got a hundred pounds weight on me. And I’m like, we can make this a win-win situation. Let’s do a charity event. Monster picks the charity, and then we scrap it out. He says he’s got three pro fights, let’s prove it. Put your money where your mouth is. You’ve got a little tiny guy calling you out, for charity. Not for anything else. Why not?”

When asked how long the issue between himself and Molenkamp had been going, Cruz countered that “I don’t have an issue. I just want charity to make some money. I have no issue with this guy.” That, despite claiming that Molenkamp was holding fighters hostage.

Later, he clarified that “it’s not trapped in a contract, it’s forced to give him clout, forced to hype him up if I want to make money.” As an example, Cruz noted that “Monster pays me. The equivalent would be, does the UFC pay me? Yes. Does Dana White own the UFC? Yes. So if Dana White says ‘go on my page and like my page,’ [that’s the equivalent].”

“I’m not the first one to say something. Dana White has also said something,” observed Cruz. He has. The UFC President went after Molenkamp himself previously on social media. 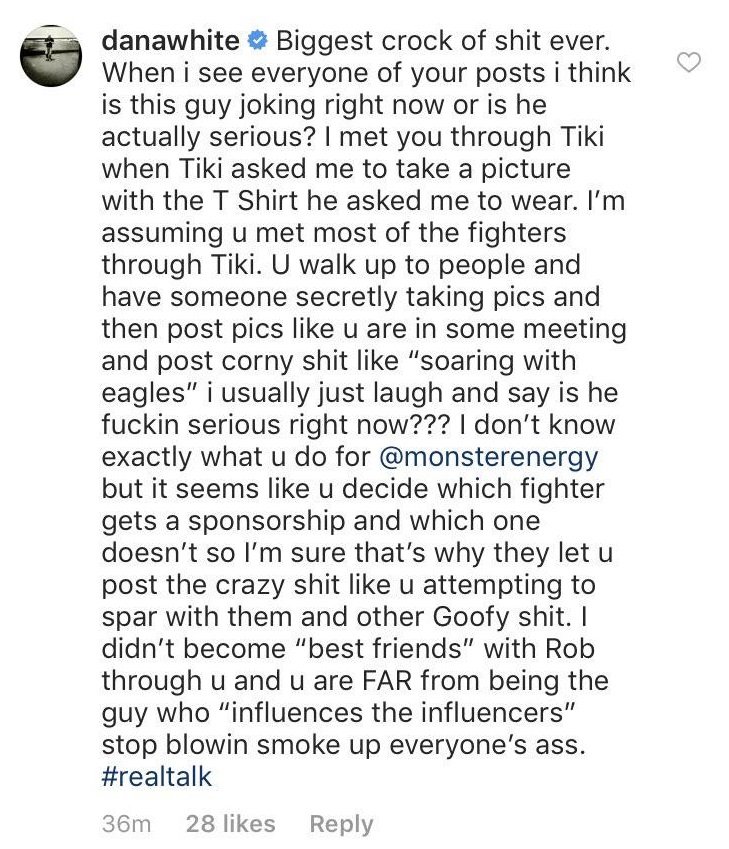 White was singing a different tune following UFC 259 however. No doubt trying to do damage control, given Cruz’s remarks likely didn’t sit well with Monster Energy, a longtime UFC sponsor.

“This isn’t like a work situation where you’re working for somebody and you’re not happy about the way you’re being treated. This is a sponsorship deal. These guys can spend their money and run their company however they want to,” White stated during his own appearance during the press conference. “And nobody is guaranteed money from a sponsor. It’s a privilege to get money from a sponsor. If you don’t like the way they do business, don’t do business with them. But they’ve been good to us, they’ve been good to the sport, and they’ve definitely been good to the fighters.”

White acknowledged that “some guys have a problem” with Molenkamp. “It’s easy to figure that one out. But Monster as a company, they’ve been solid, man. They couldn’t be any better.” 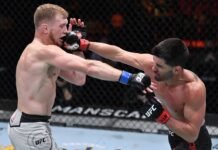