The future of the UFC’s lightweight division was in action when Drew Dober took on Islam Makhachev at UFC 259.

Dober, 6-1 in his past seven, had three straight finishes entering into the bout on Saturday night in Las Vegas. Makhachev, meanwhile, was the heir apparent to Khabib Nurmagomedov. The Dagestani fighter was on a six-fight winning streak dating back to 2016.

Dober was well aware of the takedowns of Makhachev early in the fight — but there was apparently nothing he could do to stop the first one. Makhachev easily planted Dober on his back, with the Russian landing in half-guard. A battle of inches ensued, with Makhachev moving to mount. Dober would manage to regain half-guard, but aside from not being finished, there was little upside for Drew Dober in the opening frame. When he tried to scramble out, Makhachev put him right back down. Makhachev nearly took back briefly, nearly had a crucifix, and threatened with an arm-bar at the end of the round. It was Makhachev’s round.

Early in the second, Dober looked to land his left hand. Makhachev, within 30 seconds, had shot for a takedown, in roughly five seconds more, he had completed it. As he had in the first round, Makhachev implemented his game plan to perfection. Dober simply could not find a way off his back, while Makhachev landed elbows from the top as the round wore down. Arguably a 10-8 round for Islam Makhachev. Dober was going to need a finish in the third if he had any chance of a win. And for that, he’d need to stay upright.

Unfortunately for Dober, the pair clinched almost immediately, and Makhachev had the trip takedown within roughly 20 seconds in round three — slightly faster than in the second. Dober tried to post up, but Makhachev prevented his escape. Dober attempted a kimura from his back, if only to create space, but that failed. Makhachev’s own submission attempt did not. An arm-triangle choke with a ton of pressure forced the tap from Dober.

🇷🇺 @MakhachevMMA displayed why he has top five potential. 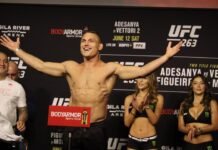 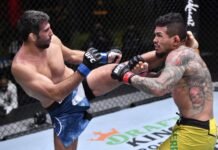