MMA Lab’s Casey Kenney is looking to add his name to the list of elite bantamweights competing for the top spot. The man in his way is considered by many as the greatest bantamweight to ever compete in the cage, Dominick Cruz. Although Kenney has always been a fan of the former champion, he is separating the legend, from the fighter he will find inside the cage at UFC 259.

“I sharpen what I have, focus on myself,” Kenney told Cageside Press in a recent interview. “I was waiting for some awe factor, but I’m treating him just like everyone else,” Kenney continued. It’s “not any different fighting Dominick Cruz. Maybe when I get in there, it’ll feel a little different. But I put in the work, put in the time, it’s exactly where I should be.”

Dominick Cruz has only competed once since losing his belt to Cody Garbrandt in 2016. A TKO loss to Henry Cejudo was Cruz’s most recent appearance, early in 2020. Kenney is a high rising prospect, 5-1 since joining the UFC, most recently defeating Nathaniel Wood at UFC 254. At only 29, Kenney was asked if he is right where he wants to be.

“I thought I’d get here a little bit sooner,” Kenney laughed. “Everything happens for a reason, I’m happy with my journey, I’m still trying to write history.”

The 29-year old contender believes a win over Dom Cruz gets him closer, but not at a title shot just yet. Kenney has some exciting names on his mind, once finished with Cruz, to add to the resume on his way to the hopeful title shot.

“Got a couple names in mind. Beat a former champion, let’s go after another former champion. Dillashaw, Garbrandt, Aldo, really anybody.” Kenney stated. “I’m on the former champion kick, or legend tour. I guess [Frankie] Edgar is on that list too.”

Watch our full interview with UFC 259’s Casey Kenney above. The event takes place this Saturday, March 6 at the UFC Apex in Las Vegas, Nevada. 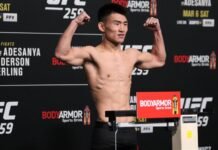 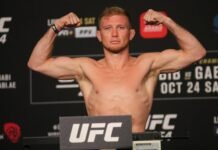