ONE Championship returned to live action this past Friday, with Fists of Fury.

Featuring the debut of Victoria Lee, Fists of Fury was a card heavy on kickboxing action, with Lee’s MMA coming out party the only mixed martial arts contest in the bunch.

A lot of attention has been put on Lee’s unquestionably tender age in the sport. It’s not every day that a 16-year old turns pro in MMA. And it’s even more rare for said fighter to be the little sister of two world champions. Unheard of, in fact. But the Lee family — atomweight champion Angela Lee, lightweight champion Christian Lee, and now Victoria — have quickly become royalty in ONE Championship. And they are looking to further extend their dynasty.

Lee’s debut went according to plan. Against a much more experienced Sunisa Srisen, Lee looked overpowered at times, but not out of place. Early nerves were apparent, but when she got the fight to the ground, she was in her wheelhouse. When she couldn’t finish the bout in the opening frame, after bouncing back and forth from ground n’ pound to submission attempts, she wisely adjusted in the second, and finished Srisen with a rear-naked choke.

In the main event, meanwhile, Flyweight kickboxing champ Ilias Ennahachi retained his title with a unanimous decision over Thailand’s Superlek Kiatmoo9, in a decision that was far closer in reality than it looks on paper.

Full results from Friday’s card in Sinapore, as well as a gallery of highlights, can be found below.

ONE Championship: Fists of Fury Results 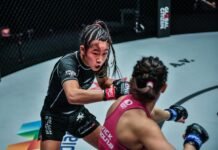