Bantamweight Ronnie Lawrence made his UFC debut Saturday night at UFC Vegas 20, fresh off an upset win on Dana White’s Contender Series. Welcoming Lawrence to the fold was Vince Cachero, an LFA veteran looking to bounce back from a loss to Jamall Emmers in his own UFC debut last August.

Both men got right at it to start the fight, fighting loose and throwing a lot of volume. Lawrence was throwing plenty of spinning attacks before he shot and completed a takedown. Cachero created a scramble and got back to his feet but ate a hard leg kick on the way up. Lawrence got another takedown, but Cachero got right back up again. Cachero landed a nice right hand forcing Lawrence to shoot and again complete a takedown. Lawrence ended the round on top after a chaotic pace. His takedowns made the difference in the opening frame.

Lawrence was far busier in his movement in round two, with Cachero doing a good job continuing to walk forward and find his shots. Lawrence yet again shot and completed a beautifully timed takedown. Cachero did very well getting back up but he went right back down. Lawrence was constantly moving but wasn’t solidifying his position. Cachero did threaten with a guillotine, but Lawrence escaped and got another takedown. Lawrence was all over Cachero on the mat and ended this round in the mount.

In the final round, Lawrence came out with a missed flying knee. He followed that up with a spinning kick to the gut followed by a sweeping leg kick, ground strikes, and then flat-out suplexed Cachero, with ground and pound behind that. It was a beautiful sequence. Lawrence got into mount and unloaded with a huge barrage of ground and pound. He was putting a beating on Cachero, who was moving and covering up as he was getting battered. The ref eventually stepped in to make the save, which could have come a lot sooner. 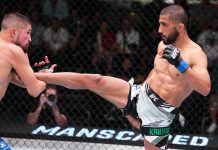