A heated featherweight scrap at UFC Vegas 19 had Charles Rosa up against Darrick Minner — and there was a bit of bad blood ahead of this one. Rosa had pretty much come out and stated plain as day that Minner wasn’t on his level. Minner retorted by suggesting Rosa had been fighting bums for most of his career.

In the end, it was Minner getting the last word on Saturday.

Minner opened the bout with a leg kick then worked into the clinch and landed a knee. Rosa fired back with a pair of leg kicks, but undeterred, Minner kept moving forward. Rosa went for a body kick but Minner caught the leg and converted it to a take down. Minner then looked for the choke, when it wasn’t to be had, he went for ground and pound. Rosa tried to tie him up and was able to get Minner back into his guard.

After a scramble — there were plenty of those in this main card bout — Minner worked to take the back of Rosa, but Rosa used the cage to cut off the attempt. Minner got there eventually however, then moved to mount. Rosa was again able to get Minner back into his guard, halting his progress. Another scramble saw Rosa get into a position where he looked for a leg lock but Minner was able to defend as the round came to a close.

Relentless pace in RD 1 from these two! ⚡️

Minner got off first in the second with a leg kick and a pair of strikes. Rosa fired back but Minner landed three hard right hands that sent Rosa to the ground. Minner dove in and looked for the submission, then secured the mount and tried to land strikes. Slowly recovering, Rosa was able to hold on and prevent further damage. Minner broke free and both men spun with Minner taking Rosa’a back again for a moment. Rosa spun again and looked for the triangle from bottom. Minner defended then worked into side control then to Rosa’s back. Rosa was able to get to his feet then fell back into Minner to try and break the hold but — Minner held on and worked for the choke. Rosa was able to defend and break free and went for an armbar to close out the second round.

Lots of fun grappling, plus the knockdown in the second, was making for a fun bout. With definite bonus potential. In the third, Rosa clipped Minner with a right, but Minner kept moving forward and landed the take down. Minner worked from side control then to Rosa’s back. Rosa spun then was able to get back to his feet, only for Minner to stay with him. Minner eventually dragged him back to the mat. Rosa, from bottom, went for a Kimura attempt but Minner escaped then went back to work on improving his position. Rosa kept attacking from the bottom and worked into an armbar then a possible omoplata, but Minner remained calm and escaped into a north- south position. One benefit for Minner, he had spent plenty of time right in front of his corner and coach James Krause. Rosa escaped again but gave up his back, Minner looked to lock in the hooks as time wound down but Rosa was able to avoid his attempts, and finished the round landing strikes in a futile effort. Minner easily had the win. 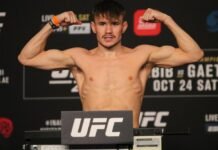 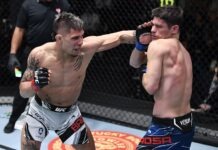 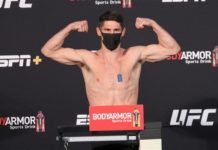