According to Brett Okamoto of ESPN, No. 2 ranked flyweight former title challenger Katlyn Chookagian will fight No. 7 ranked Viviane Araujo on May 15.

Chookagian (15-4) started 2020 with a loss but ended with a very impressive win, as she went 2-2 in four fights last year. “Blonde Fighter” finally got her title shot last February against champion Valentina Shevchenko after grinding for four years in the promotion. She ultimately came up short as she was finished in round three via TKO. Chookagian rebounded three months later by completely dominating the champion’s sister Antonina Shevchenko to win via a unanimous decision. Next, she welcomed former strawweight champion, Jéssica Andrade, to the division but ended up losing via TKO in the first round. Chookagian wanted to get right back to work and fought a month later against Cynthia Calvillo, defeating her at UFC 255 via unanimous decision.

Araujo (10-2) is coming off the biggest win of her UFC career this far. She defeated women’s MMA pioneer Roxanne Modafferi last month on the second ‘Fight Island’ card of 2021 in dominant fashion. Before Modafferi, she rebounded from her only UFC loss to Jessica Eye by defeating Montana De La Rosa via unanimous decision at UFC Fight Night: Overeem vs. Sakai, her only fight in 2020.

The only other fight announced for May 15 so far is:

No location/venue has been revealed for the date. The date is the potential landing spot for UFC 262. 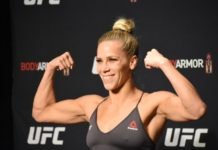