Las Vegas, NV — After a win over Andre Ewell over the weekend at UFC 258, Chris Gutierrez has another sort of fight ahead of him.

For the past several years, the bantamweight has been locked in a custody battle over his son. “I’m going through a really bad custody battle. I haven’t seen my son in two years. I’m just trying to be in his life. That’s all it is,” Gutierrez said following the win, which came at a 140lb catchweight due to the short notice of the booking.

If Gutierrez seemed a little emotional after the big win, that ongoing struggle may be why.

“When you’ve got something that’s yours, and it gets taken from you, what do you do? Every obstacle that comes my way, I try to face it,” Gutierrez explained. “And I have. To not be able to have something that’s yours, taken from you like I said, it hurts. But my job for right now is just to be the best I can be. Successful, inside and outside, so there will be a day where we will reunite, and I can give him a really good life. And a life that I really never had. That’s my goal. That’s my dream.”

Coincidentally, Gutierrez’s opponent at UFC 258, Ewell, is going through an identical battle.
“Andre’s going through the same thing. As a man, and as a father, I feel for him on that aspect. That’s one thing that we relate,” Gutierrez noted. The fighter revealed that he had actually reached out to Ewell years ago to offer his support.

On the fighting side of things, meanwhile, Gutierrez displayed some deadly kicks with the bout, and took home a unanimous decision win. The plan now, he said, is to “keep climbing the ladder. Just keep going up.” Once Gutierrez is healed up from some bumps and bruises, he added, he wants to “just get back in there as soon as possible.” 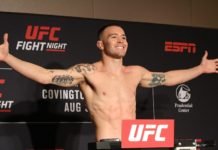