Las Vegas, NV — Nursing a wounded leg with a bag of ice following UFC 258, Belal Muhammad found the silver lining. While his leg was “a balloon,” the fighter exclaimed, “it doesn’t hurt as much when you win. So I’m cool with it.”

Muhammad (18-3) was expecting the leg kicks. After all, opponent Dhiego Lima is brother of Bellator welterweight champ Douglas Lima, well-known for his vicious leg kicks. Seems it runs in the family.

Speaking to media outlets including Cageside Press following his unanimous decision win, Muhammad noted that “I’m my own worst critic. What I wanted to do with this fight was start a lot faster.” The fighter who wants you to “Remember the Name” noted that he usally picks things up towards the end of a fight. That’s something he tried to improve on at UFC 258. “I had a really good warm-up in the back, the stuff that we tried worked, and I started off the first round really fast. It’s an ever-evolving game, I felt like that worked. My game just keeps getting bigger and better, so next fight’s going to be even better.”

Following the victory, Muhammad called out China’s Li Jingliang. In terms of his reasoning, it’s all about the rankings. “It’s just the rankings. I’ve been asking and freaking pleading for a ranked guy this whole time, they didn’t give it to me,” Muhammad explained. “Then they finally got rid of a couple of these guys that are just all talkers, like Nate Diaz and stuff. They shouldn’t be in the rankings, so they finally got rid of these guys, and they put real fighters out there, that are actually competing and stuff like that. So I finally got in there, but I didn’t earn that spot until I won. So I won today, now I want a ranked guy. Now I earned a ranked guy.”

Instead, he targeted a bout that he feels makes sense. “Li Jingliang’s right above me. I was number 12, then he knocked out [Santiago Ponzinibbio], then they put him at number 12. He just took my spot, so I want that spot right back.” On a four-fight win streak with the number 13 ranking, Muhammad make have done the matchmakers’ job for them. 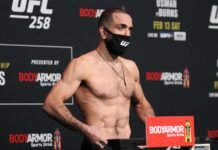