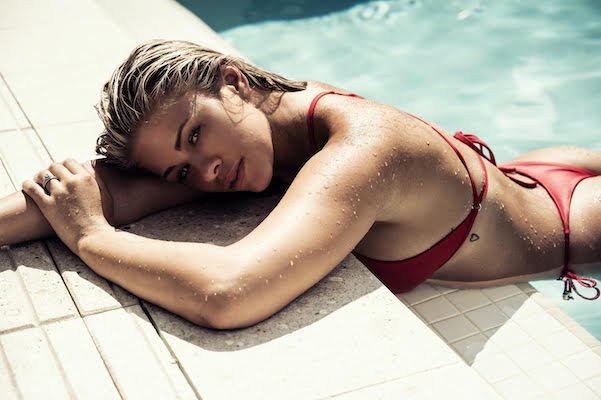 On the same day as an intense weigh in, Paige VanZant announced the launch of a new website where she plans to release exclusive content with her fans.

Former UFC fighter Paige VanZant almost got her BKFC career started a day early.  A day before headlining for her new company, VanZant and her opponent Britain Hart got into an altercation during the ceremonial weigh-ins on Thursday.  At the weigh-ins, Hart got in close to VanZant, who responded by pushing her away by the throat.  Hart responded on-stage with profanities and told VanZant to “get the **** rules right” while being restrained by BKFC CEO David Feldman.

It got HEATED during the final faceoff as @PaigeVanZant grabbed @TeamBritainHart's throat before being cussed out. 😱#BKFC | More: https://t.co/KqtT6hcKoU pic.twitter.com/yhxC1ISxri

VanZant, 26, is looking to secure a victory in her first fight as a bareknuckle fighter after signing with the Bareknuckle Fighting Championship last year.  VanZant joined the company in free agency after a six year run in the UFC that saw her gain crossover stardom while with the promotion.  Hart, 31, is looking for her third straight combat sports victory.  After opening her career with five losses and three draws, Hart won both a boxing and bareknuckle bout in 2020.

Ahead of the event, VanZant announced the launch of a new website, PaigeFanZant.com, where she will be releasing exclusive content that will not be seen on anywhere else.  Per a press release:

“Every time I check my social media, my fans are always asking me for more. By launching PaigeFanZant.com with FanTime, it makes it easier for followers to find the exclusive content I’ll be putting out. Be sure to subscribe in the lead up to my next fight. I’ll be giving an inside look at my training and recovery that you won’t find anywhere else!”

The release went on to say, “…fans can expect to see more exclusive content of Paige’s training along with her at-home life with her husband, Austin.”  To gain access to the exclusive content, fans can subscribe for $20.  VanZant and Hart will be headlining BKFC’s pay-per-view event, Knucklemania, tomorrow night (Friday, February 5, 2021).