When two jiu jitsu black belts square off in the octagon, we’ve come to expect at least one of them to look to prove their superiority on the mat. When Carlos Diego Ferreira and Beneil Dariush squared off the first time, over six years ago, that’s precisely what happened. Dariush shot six takedowns and spent over half the fight in top control en route to a unanimous decision victory.

While the games of both men have clearly improved since UFC 179, it’s actually the recent results that Ferreira thinks will change the game plan of Dariush this time around.

“I think it’s going to be explosive,” Ferreira told the Top Turtle Podcast recently. “Dariush is a guy, in his last two wins, who was super impressive. I think he’s really going to try to be on his feet with me.”

It isn’t just Dariush though, who Ferreira expects to want to trade. In fact, if he has his way, he would love to oblige Dariush in exactly the kind of fight he might be looking for.

“I want to, sorry for my language, but I want to go balls to the wall. I want to go for the bank and I want to get in there and give everything I have. I’m willing to bleed and put my heart and soul inside the octagon,” he said. “Two jiu jitsu guys, you have to expect every part of the game, but I really want to work. I want to fight. I want to bleed. I want to go for a fight of the night.”

Currently sitting at #10 in the rankings, a violent and exciting win over Beneil Dariush would seemingly send Ferreira into the thick of things at lightweight and put him in position to call for a big name. However, he’s not so sure that it will and is far more worried about staying active.

“I don’t think a win is going to put me anywhere. I think I’m still going to be at the same spot, but I don’t really care because I really want to fight this year,” he admitted. “[Last year] I was just hanging on the couch.”

When pressed on why he didn’t think an exciting win over a ranked opponent would do much for him, he explained that it had far more to do with the people in front of him.

“Those guys at the top, they don’t even want to fight, bro. Paul Felder, he [came back] to get another big fight. He doesn’t want to fight us down the rankings a bit,” Ferreira said, noting the problem isn’t just with the UFC’s commentator, but the entirety of the top 10. “I don’t think those guys want to fight. The guys just want a big paycheck.”

Ferreira hopes a busy 2021 will be a catalyst for change in this regard. If it isn’t, well, he has a plan for that too.

“I want to stay busy. I want to get three more fights this year and I hope with those three fights I can at least get to the top 4 or 3,” he said. “If they don’t put me [up at all] in the rankings, I’m going to have to make it happen. I’ll have to start calling people out.”

Ferreira looks to get the first of those 2021 victories when he faces Dariush in a rematch. That fight takes place this Saturday, February 6 as part of the UFC Vegas 18 main card on ESPN+.

You can listen to the full audio of this interview at 2:52.

For more from Diego Ferreira, his full UFC Vegas 18 virtual media day interview is below. 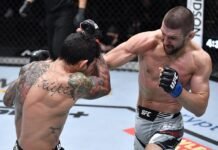 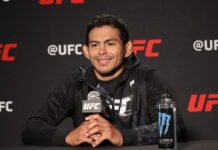 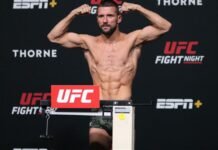