In a press release Monday, USADA (U.S. Anti-Doping Agency) officials announced that the 34-year old has tested positive for “tamoxifen and/or tamoxifen metabolite 3-hydroxy-4-methoxy-tamoxifen” in urine samples collected on August 25, September 4, September 9, and September 17, 2020. Tamoxifen is a selective estrogen receptor modulator that is primarily used to treat breast cancer in both men and women.

The substance is prohibited at all times under the UFC’s Anti-Doping Policy, which USADA oversees.

After being notified of his positive tests, Azaitar provided evidence that he was prescribed the drug to treat symptoms of an unspecified medical condition. However, while USADA noted in Monday’s press release that Tamoxifen is “also prescribed off-label for males with various other conditions,” there has been no exception made in Azaitar’s case. “Although the substance was taken at the direction of a physician, Azaitar lacked a valid Therapeutic Use Exemption (TUE) and his subsequent application for a retroactive TUE was denied due to lack of sufficient medical justification. Under the applicable rules, Azaitar was eligible for a reduction to the period of ineligibility based on the specific circumstances of his case and for his Full and Complete Cooperation.”

Azaitar’s seven-month ban from competition is backdated to August 25, 2020, when his first positive sample was collected. The middleweight had two fights booked in 2020, but withdrew from fights against Joaquin Buckley and Alessio Di Chirico (who would eventually face each other earlier this year). With a record of 14-2-1, Azaitar has not competed since his UFC debut in 2018, when he earned a unanimous decision win against Vitor Miranda at UFC Hamburg.

In some unfortunate timing, Abu Azaitar’s brother, Ottman, was recently cut by the UFC after breaking health and safety protocols on “Fight Island” in Abu Dhabi. Ahead of UFC 257, Ottman Azaitar and his team reportedly removed wristbands and smuggled them to an unknown party outside the “safety zone” set up to house athletes. That individual was then caught on camera attempting to smuggle a bag into the fighter hotel. While no charges were laid, the fighter was immediately removed from the venue and cut by the promotion, after putting an entire event in jeopardy. 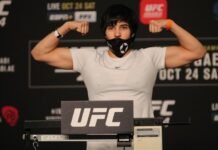 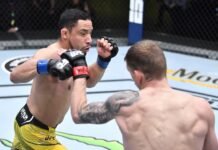