In 2019, JJ Okanovich picked up a win on Dana White’s Contender Series, which has in recent years become the main port of entry for fighters looking to secure a spot in the UFC. While Okanovich did not secure a contract that night, the Bellator MMA veteran did extend his win streak to seven straight.

Now, with a 7-1 record overall, Okanovich returns in a key fight against fellow lightweight prospect Lucas Clay on Friday night at LFA 98. Speaking to the Top Turtle Podcast ahead of the fight, the American Kickboxing Academy lightweight explained that since his DWCS appearance, he’s been “just taking it day-by-day. Nothing’s really changed. I did get that W, but nothing’s really changed. I didn’t get offered that contract, so I guess it just wasn’t my time.”

Okanovich, with that in mind, has focused on getting back in the gym and getting better each and every day. “When my shot comes, I’m going to be ready for it,” he promised.

The past year has not been great for many of us, and Okanovich is no exception. In fact, he hasn’t been able to compete since his 2019 Contender Series showing. “I’m one fighter who, if you call me, I’m ready to go. I just didn’t receive any calls. There were no fights going on,” he explained.

Okanovich was expecting to get in the cage in March, but of course, that’s precisely when the MMA world, and everything else, shut down due to the coronavirus pandemic. “2020 has been a rough year. I’m looking forward to getting back in the cage, and staying busy afterward, for this fight.”

It’s hard to look at a fight like the one JJ Okanovich had back in July 2019 against Christian Lohsen and avoiding contemplating “what if?” scenarios. A little more urgency, perhaps, and “The Bosnian Bomber” would already be in the UFC. When contracts were awarded that night, Okanovich was “hopeful, but I knew with my performance, I just didn’t do enough. I didn’t knock him out. Dana’s always looking for that knockout.’

The lightweight believes that he did have the killer instinct — he just didn’t finish the fight that night. “I know they’re not going to pick a guy up off a decision win. I just have to do better. I have to go out there and shut the lights off on the opponent, or get a finish,” he added.

Okanovich has juggled getting the finish with getting cage experience at a high level in his last two bouts. “Trying to play around with a few things,” as he put it. And despite having his hand raised in both outings, he believes that “it hasn’t been my fight for the last two fights, but I’m coming in there this fight [at LFA 98] and looking for the finish.”

All that said, Okanovich believes he’s one big win away from the UFC. “I train with a bunch of guys who are already in the UFC, and I feel like I’m right there. I feel like the talent’s there, everything’s there, I just need my shot,” said Oknovich. “And the only way I’m going to get my shot is to keep getting those Ws.”

“Obviously a W in my last fight wasn’t enough. So I need to do something a little more impressive just to get that offer,” he continued. “The main thing is just get these Ws and use all my tools, and find that finish. And don’t leave it to the judges anymore, and have the UFC notice I’m a killer.” 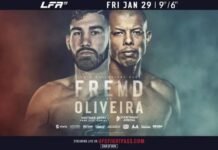 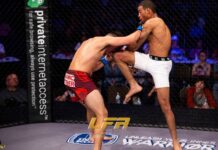