With the atomweight grand prix looming, China’s Meng Bo improved to 3-0 under the ONE Championship banner at Unbreakable on Friday — going the distance in the promotion for the first time.

That’s not a bad spot to be in. But the Chinese fighter missed weight for Friday’s bout, against Samara Santos, throwing a wrench in the works. The fight wound up held at a 54.80 KG catchweight (note ONE’s modified weigh-in rules as well) as a result.

“I’m so sorry about the weight problem this time. As you know, it’s a very cold winter in China, so I had some trouble losing my weight,”  Bo explained, speaking via translator at a post-fight interview attended by Cageside Press and other media outlets. Moving forward, Bo promised to “do her best” to ensure she comes in on weight.

Having improved to 17-5, with the atomweight grand prix not officially set yet, there’s a question of where Bo sits in the division. And how that might help her seeding when things do get underway.

“Because my opponent this time, Samara, is not in the atomweight division rankings, I think I’ll stay in the number two ranking,” suggested Bo. “If I have a chance next time, I wish I can have a fight with the number one ranked [fighter], Denice [Zamboanga], so I can prove I have the ability to get the number one rank.”

Zamboanga has been perfect in her own ONE Championship run, and MMA career, to date. A match-up between Bo and the Filipino fighter could very well be coming our way later this year as a result.

Watch the full ONE Championship: Unbreakable post-fight interview with Meng Bo above. 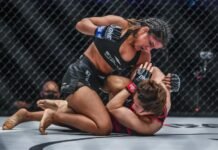 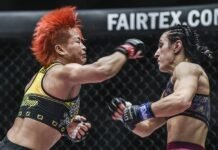 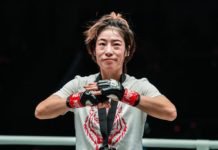