UFC Fight Island 8 was the second of the UFC’s three events to kick off the new year. In the main event, Michael Chiesa cemented himself as a welterweight contender with a decision win over Neil Magny. Warlley Alves shocked the world in the co-main event, with a TKO over rising star Mounir Lazzez. Today, we will take a look at what is next for the winners of the mid-week card.

After his win at UFC Fight Island 8, Chiesa called out Colby Covington. While the UFC has been looking at booking Covington against Jorge Masvidal, this was actually a really smart call-out. The welterweight division is currently deadlocked waiting on Gilbert Burns to challenge Kamaru Usman for the title. It would seem like Chiesa’s only options to move forward in the division would be Covington, Stephen Thompson, or Jorge Masvidal. Stylistically, the most exciting fight for him would be Covington and that fight would get him closest to a title shot.

Warlley Alves also made a pretty bold call-out after his win at UFC Fight Island 8. Alves called out Nate Diaz, saying that he does not like Diaz’s stance on marijuana and doesn’t feel like marijuana has a place in the sport of MMA. Nate Diaz is known to only take big fights especially at this point in his career. So it is very unlikely Diaz takes a fight with a guy like Alves unless Alves goes on a significant run in the division.

Instead, Alves should look to fight someone like Geoff Neal. That would be an extremely fan-friendly fight. If Alves won that fight he could expect even bigger fights as that win would likely get him inside the top 15.

Isaac (Ike) Villanueva was able to knock out Vinicius Moreira in the second round of their bout on Wednesday. This win brings Villanueva to 1-2 in the UFC. He will probably be taking a step up in competition in his next fight because of how impressive the knockout was. A great match-up for Villanueva would be Jake Collier. Collier is a UFC veteran who has been with the company since 2014. Collier had a significant layoff from 2017-2020 and is 1-1 since returning in 2020. This would be a great opportunity for Villanueva to fight a veteran that is still shaking some of the rust off. The weight class could be a question — Ike started at heavyweight and dropped to 205, while Collier started as a middleweight(!) and currently competes as a heavyweight. He’d probably be better off down a weight class however, if Ike doesn’t want to try heavyweight again.

Viviane Araujo was able to dominate Roxanne Modafferi en route to a unanimous decision win on Wednesday. That win will probably line her up for a shot at someone in the top five. The best stylistic match-up for her in the top five would without a doubt be Jennifer Maia. Both women are black belts in BJJ and are starting to really evolve in the striking department. That division has had a tough (nay, impossible) time defeating champion Valentina Shevchenko. So it would be good to see someone new get their shot to take down the queen. As the most recent title challenge, Maia could propel Viviane Araujo to bigger and better things.

Matt Schnell won a razor-close split decision win over Tyson Nam at UFC Fight Island 8. Alex Perez is a guy that fought his way through the flyweight division but somehow never met up with Schnell. That should change as Perez is coming off losing to Deiveson Figueiredo for the flyweight title. Perez should be looking for a fight that will keep him at the top of the division. That fight might just be with Matt Schnell, whose only loss in the past two years is to Alexandre Pantoja. Schnell has proven time after time that he is one of the best flyweights in the world and if he beats Perez, he will likely get his chance to show it. 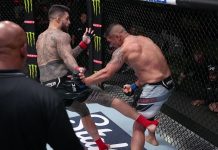