UFC Fight Island 8 was all about the youth movement. Seven fighters made their debut at the Fight Night event in Abu Dhabi on Wednesday. Several others were making their second or third UFC appearances. With a card so heavily reliant on young talent, it was no surprise to see a handful cash in when it came time to hand out the bonuses.

Fight of the Night at UFC Fight Island 8, for starters, went to the lightweight pairing of Mike Davis and Mason Jones. Jones, a Cage Warriors double champ, made his debut against Davis, who had two prior outings inside the octagon. The back-and-forth slugfest saw Davis get the nod in a very close, crowd pleasing affair.

The 25-year old Jones took it all in stride.

Quick one from me. Lost a great fight to someone who had a better night & a better game plan. No excuses my end. Great fight from Mike.
Will be back better than ever

He, along with Davis, will also take home an extra $50,000 in bonus money. For “Beast Boy” Davis, who improved to 9-2 with the victory, it’s his second straight win. His lone loss in the UFC came against current welterweight title challenger Gilbert Burns.

Performance of the Night bonuses at UFC Fight Island 8 went to Umar Nurmagomedov and Warlley Alves. In the co-main event, Alves wailed on opponent Mounir Lazzez’s body with multiple kicks, putting him away via TKO in the end. Nurmagomedov, a cousin of lightweight champion Khabib, choked out fellow newcomer Sergey Morozov in his debut. 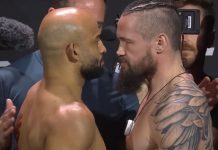 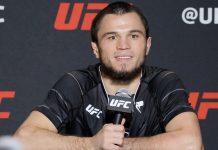