In the end, Dan Hooker was the lightweight willing to fight former Bellator champion Michael Chandler, in the latter’s UFC debut.

The bout is the co-main event of this weekend’s UFC 257, topped of course by Conor McGregor vs. Dustin Poirier 2. But Hooker vs. Chandler is no less of a thrilling fight, and Hooker accepted the bout while the rest of the division’s upper tier appeared to overlook “Iron Mike.” Or at least shun him.

Now, he’ll take one with someone who isn’t even in the rankings — albeit an opponent with world-class pedigree. “Regardless of rankings, I feel like Michael Chandler is one of the best lightweights in the world,” added Hooker. “So that’s who I want to test my skills against.”

Current champ Khabib Nurmagomedov will allegedly have his eye on the lightweight foursome atop UFC 257, as he debates returning to the octagon for one last fight. That brings with it a certain amount of pressure to perform, of course.

“I feel like who I call out after this fight will completely depend on the nature of this performance, or how impressive the performance is,” Hooker admitted. “The champion himself, if you put on an impressive performance, that could be warranted. But I feel like it comes down to what happens on the night. If you get a close decision victory or something like that, it’s not justified. It’s not his terms or conditions of his coming back and giving you the opportunity to fight one of the pound-for-pound, or the pound-for-pound, best fighters in the world. That’s a great opportunity. So I feel like the performance will warrant the callout.”

The New Zealand native if coming off a loss, of course. But prior to that, he’d put together three straight wins. And Hooker’s eye, he said later, is set on the title. Regardless of who holds it. “Who will be next, it’ll be whoever. I definitely know that with a win, it’ll be nothing but massive fights. The winner of the main event [McGregor vs. Poirier]. An impressive performance could draw Khabib back. Or it’s definitely going to be someone else in that top five.” Regardless, Hooker appears to recognize that he’s on the cusp of greatness. “I feel like I’m either in with the shot at the title, or it puts me one fight away from the title. I feel like I’m extremely close.” 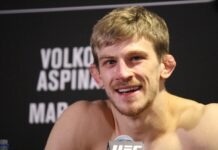