A former UFC fighter and MMA pioneer has passed away following a battle with COVID-19.

Paul Varelans, a familiar face at early UFC events, contracted COVID-19 in December. The former fighter announced his diagnosis on Facebook on December 12. Shortly after, according to UFC co-founder Art Davie, Varelans was placed on a ventilator, and not faring well.

On Saturday, Varelans’ friends and family confirmed that the former fighter, aged 51, had passed away.

Varelans (9-9) was a finalist at UFC 7, back in the days of one-night tournaments. An eight-fight veteran of the promotion, that September 1995 night may have been the biggest of his UFC tenure, as he finished both Gerry Harris and Mark Hall before losing to Marco Ruas in the final.

Posting a record of 4-4 inside the UFC, Varelans final appearance for the promotion came at Ultimate Ultimate 96, where he lost via corner stoppage to Kimo Leopoldo. However, Varelans fought on, competing several more times before calling it a career. His final MMA bout came in February 1998, in The Netherlands, where he knocked out Dick Vrij in the second round.

In his MMA heyday, Varelans also dabbled in pro wrestling, appearing for ECW alongside one of its biggest stars, Taz.

The career of “The Polar Bear” came to an end essentially when weight classes were introduced to the sport. An imposing 6 foot 8, the massive athlete simply couldn’t make it down to 265lbs, he later explained. In fact, he’d been well above that since high school.

Admitting that he had struggled after the loss of MMA from his life, which led him to drug addiction that he later recovered from, Varelans said in a 2018 interview that “MMA and the UFC created a space where people kind of started feeling their liberties again. We’ve lost so many rights to just live your life and do what the hell you want, that there’s this place and space and people for people that naturally have this want to, like “you know what, if I want to risk my life, I’m going to f*cking do it, because what’s a life worth living if I haven’t had that adrenaline, or haven’t taken that chance?”

Varelans found his way into the MMA world following college, where he both competed in football, and was part of the school’s boxing club. Varelans later moved to motivational speaking, and took part in autograph signings at events like UFC 198. He was also involved with Legends of the Cage. 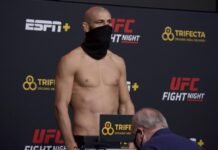 UFC: Holly Holm Out of May 8 Date, Julianna Pena Calls for Nunes Title...