For a refresher on Santiago Ponzinbbio’s inception into the UFC on TUF Brazil 2 as well as a recap of his impressive 7 fight win streak, watch the video above!

In 2018, Santiago Ponzinibbio KO’d a then #9 ranked Neil Magny in front of his home crowd of Argentina. The fourth round KO was an amazing moment for Ponzinibbio and brought his current win streak within the UFC to seven, dating back to 2015. Ponzinibbio was a hot topic, that had fans and anaylists of the sport buzzing, and was undoubtley only another win away from title shot for the welterweight belt.

Little did the “Gentle Boa” know, that the next two years would not include a shot at the title, or even any professional fights for that matter. Aside from a scheduled bout with Robbie Lawler at UFC 245 in Decemeber of 2019, Ponzinibbio had absolutely no activity within the UFC. Santiago had a much larger fight on his hands, one for his life and for his future professional MMA career. According to an interview with MMA Junkie’s Farah Hannoun back in July of 2020:

Not long after his bout with Magny, Santiago contracted an infection that spread to his blood with two different types of bactiera, epidemic staph and pseudomonas. This affected him by causing a lot of swelling in his body with a lot in particular in his knee.

This resulted in Ponzinibbio going to the hospital to be evaluated by doctors, only to be discharged eight days later after having a Peripherally Inserted Central Catheter (PICC line) inserted into his arm running to his chest in order to distribute medication so he could recover.

But, problems arose when Santiago came down with an 103 degree fever, dropped about 30lbs., and was advised by the doctor and those closest to him to return to the hospital immediately.

Upon his return it was discovered that the medication given to Ponzinibbio had caused a bad reaction, and actually killed off his white blood cells, (as Ponzinibbio elaborated on in his interview with Lucas Grandsire) leaving his body even more vulnerable (hence the fever and weight loss). After being isolated in a separate part of the hospital and evaluated by doctors for a few days Ponzinibbio’s condition improved enough for him to go home.

After the PICC line came off, oral medications and time were required before Ponzinibbio was finally cleared by a doctor to begin Physical Therapy (PT). Ponzinibbio began to train and flew to Las Vegas in order to do his PT at the UFC Performance Institute (PI). After a few weeks of PT work, Ponzinibbio was seeing minimal progress and experiencing a lot of pain and inflammation in his leg, specifically the knee area. Ponzinibbio also said in the same interview with MMA Junkie that, “I couldn’t walk. … The day I didn’t take the anti-inflammatory, I couldn’t go to the room, I couldn’t go up the stairs. It was crazy.”

At this point, the staff at the UFC PI advised Ponzinibbio to get an MRI in his leg that revealed an infection in his bone.

“A couple of doctors saw the MRI and they said, ‘Listen, you have an infection in the bone. It’s very, very dangerous. Maybe you can’t fight again in your career.’” Ponzinibbio  recounted to Hannoun.

And this is where the canceled fight with Robbie Lawler at UFC 245 came into play as by this time it was about November and the it wasn’t realistic that Ponzinibbio was going to be able to compete in that state.

After arthritis was identified, Ponzinibbio began working with a rheumatologist who produced a personalized a treatment plan that slowly began to get his body back to normal. With plenty of rehab Ponzinibbio gained his strength back and eased back in to training.

Unfortunately even more trouble struck when in June of 2020 Ponzinibbio tested positive for COVID-19. As a result the Argentinian had to be quarantined from the gym and miss even more valuable training time.

So in short, a combination of arthritis, bacterial infections, COVID-19 and extremely bad luck have all kept Ponzinibbio out of the cage for over two years.

After 790+ days outside of the octagon and hours and hours of careful preparation, Santiago Ponzinibbio is finally ready to make his return to the octagon. Originally, Ponzinibbio was slated to face Muslim Salikhov in his return fight for UFC Fight Island 7. However, Salikhov had to withdraw from the bout due to complications from his ongoing COVID-19 symptoms. In his place, Ponzinibbio will instead fight Li Jingliang. Salikhov is a striker much like Li. Though he is more polished and has more KO/TKO finishes, Li has had a lot more UFC experience as he entered the organization in 2014.

Li is a fighter that is not afraid to stand in bang and pretty much every fight that he is in, is an entertaining one. Li Jingliang has earned five performance bonuses in his last seven fights. On Ponzinibbio’s seven-fight win streak prior to his absence he accumulated two Performance of the Night bonuses and four KOs/TKOs. This fight is sure to be a striker’s delight, and great match-up to welcome back the Argentinian native, so it’s fitting that the bout is positioned just under the co-main event in the so-called ‘People’s Main Event’ slot for the first UFC card of 2021, UFC on ABC 1. 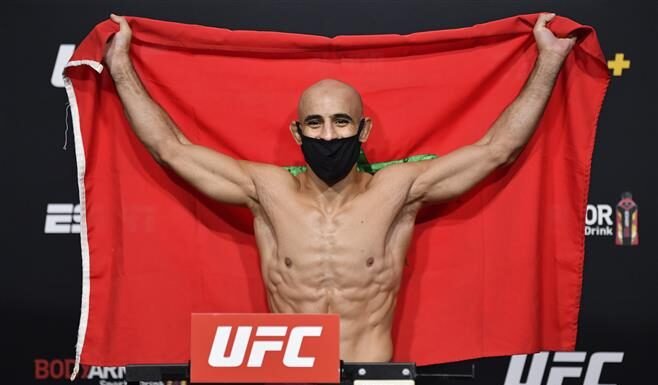