The return of Mike “The Truth” Jackson, and the octagon debut of Dean Barry, will have to wait.

Per a social media post by Barry (3-1), his UFC coming out party has been pushed back to either March or April. Originally, the pair had been booked for the January 20 Fight Island date.

However, Barry would write that “Well guys 20 minutes before 2020 ended I got a phone call to say Jackson wont (sic) make the fight on January 20th you just cant (sic) write this sh*t. Do not ask me why because I dont (sic) know the full ins and outsnd (sic) wish him the best.. We are been (sic) rescheduled for march/april in America.”

Jackson (1-1) would later confirm the news on social media, saying he was “blaming this one on 2020” without detailing what actually led to the fight being postponed.

A part-time fighter, photojournalist, and podcaster, Jackson rose to infamy when he defeated former WWE star CM Punk in Chicago at UFC 225 in 2018. Jackson had originally been brought in as an opponent for Mickey Gall in 2016, after Gall had been lined up to be Punk’s first UFC foe. Although Jackson won his fight against Punk, he took heavy criticism for showboating during the performance, and not finishing the pro wrestler despite the fight being rather lopsided. 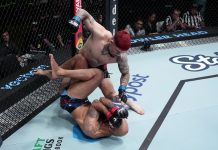