Nina Ansaroff will return to the octagon next April for the first time since the birth of her daughter. And when she does, she’ll be taking on BJJ powerhouse Mackenzie.

The fight, expected to take place on the UFC’s April 10, 2021 card, was first reported by ESPN on Monday. For Ansaroff, who is partners with UFC double champ Amanda Nunes, it will be her first action since a June 2019 loss to Tatiana Suarez.

Ansaroff (10-6) had been on a four-fight win streak prior to that defeat. That run included wins over Angela Hill, Randa Markos, and Claudia Gadelha.

Nunes and Ansaroff welcomed Raegan Ann to the world on September 24. The birth of the pair’s daughter marked the first child for the couple, with Ansaroff carrying the baby. With Nunes reportedly competing in March, a bout just a little bit later for Ansaroff makes plenty of logistical sense.

Mackenzie Dern (10-1), another of the UFC’s fighting moms, is coming off a win earlier this month at UFC 256, where she got past Virna Jandiroba by unanimous decision. The victory improved her win streak to three, with all three inside 2020.

No location, venue, or official name/numbering has been announced for the UFC event on April 10, 2021. 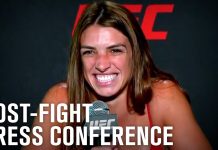