Anthony Pettis has a nice little bookend to the pandemic era in MMA. Having competed on the first UFC card back from hiatus in May, he now fights on the final event of 2020, UFC Vegas 17 this Saturday. There, he faces Alex Morono, with Pettis hunting for a second consecutive win at welterweight.

“The first fight back was wild. We were in that arena with no one in the arena. That was definitely a different experience,” Pettis said regarding his UFC 249 fight. That event took place in the cavernous VyStar Veterans Memorial Arena in Jacksonville — all the more hauntingly empty given the size of the venue. Still, the Milwaukee native defeated Donald “Cowboy” Cerrone that night.

Pettis (23-10) is expecting things to be a little different this Saturday at UFC Vegas 17, which will take place, as all the promotion’s U.S.-based shows since May have, at the UFC Apex in Las Vegas. “It should be a little more comfortable getting out there and changing and exchanging it up,” he suggested. “But man, it’s been a crazy year for everybody. 2020 was a wild year for all of us.”

For Anthony Pettis, 2020 has also been a year of growth, both as a person and an athlete, he said. On the sporting front, he’s been using a sports psychologist to help refine his mental game. Something he would not have been open to in the past.

For Pettis, the need too seek help on that front arose “after the [Rafael dos Anjos] fight,” he said. He began letting external opinions resonate, which led to him letting “a lot of opinions get in my head, and they just dug down deep. I wasn’t aware that it was making my mind drift off during my training sessions, during my downtime, fight week. I was letting these thoughts dictate my actions and dictate how I approach these fights.”

Once Pettis did enlist the help of a sports psychologist, “he just opened up my eyes to a whole new aspect of not only the fight game, but to my life. Like how I deal with specific situations, when your body’s in control and your mind’s out of control.” The mind, noted Pettis, has a set way of handling situations involving fear, anger, anxiety, and other emotions. What the psychologist did was force Pettis to look at how he was responding to them. “Why do I react this way? Why do I handle it this way?”

They started, said Pettis, “in my personal life, like fixing my personal relationships. How I react with my daughter, with my fiance, my mom, and then we trickled that into my fight career and bring bringing back that presence to the training room.”

“Showtime” has also opened up his own management company. It’s something he’s been working at a while now, he said — and it’s not necessarily that other managers are bad. Rather, as a fighter himself, “I think I know the way it needs to be done. And I know what fighters need at all different stages of their career,” Pettis stated.

The other big story for Pettis this weekend, beyond his fight with Alex Morono, is that it’s the final fight on the former champ’s UFC deal. It’s not something he’s looking to dwell on ahead of the bout. “We’ll see what happens after this one. But I’m trying not to let my mind get into that,” he said. Even in an era where Dana White has said massive roster cuts are coming.

“No matter, your job is always on the line if you don’t perform,” noted Pettis. “So I’m coming with the same mindset as always.” Pettis also understands that as a fighter, “our job is to make as much as we can from this. It’s what you’re worth, what you can bring to the table. I know this is a business. I’m not going in there like, ‘if I beat Alex Morono in a fantastic way, I get a crazy pay bump. I’m just playing it little by little.”

In the past, Pettis would sign his next contract with several fights left on his existing deal. “This time around, I’m just taking it one fight at a time. I think that’s why I chose this opponent.” It’s no longer about the next big fight, what gets him to the championship — although he does want to take another run at the title. “I don’t want to jump into that next big fight when everything on the back end of my life isn’t ready. So I feel like I’m putting all the pieces together with the coaches, my personal life, my family, my friends, who’s around that circle. I think I’m getting that part right, so once I do make that run, it lasts a lot longer.” 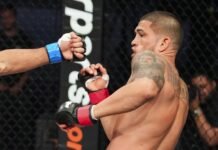 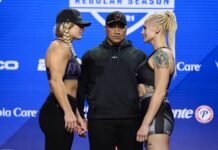 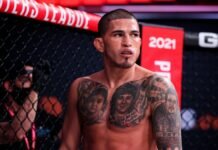