Las Vegas, NV — Seven fights into his MMA career, France’s Ciryl Gane owns a finish over a former UFC heavyweight champion. That came at UFC 256, where he got the better of Junior Dos Santos. An elbow set up the finish in the second round.

Seven fights. Three years. After crossing over from Muay Thai in 2018, Gane has proven to be quite the prodigy in MMA. He may still hold the prospect label on a technicality due to his low number of fights, but expect Gane to shake that before long.

Mind you, all the hoopla over the win is on the fans’ side. For Gane, it’s just another win. And for good reason. The gravitas of beating JDS, “probably this is something that you understand,” he told media outlets including Cageside Press following the bout. Not so for Ciryl Gane himself. “I don’t know exactly why, maybe because I just started three years ago. Before that, I didn’t know MMA.” Of course, Gane is happy with the win. He’s just not about to break into song.

“I’m really happy to do well,” he said following the fight. “We’ll see [what comes] for the future.” Anyone, anywhere was his suggestion. “I just want to do my job, that’s it.”

Leg kicks were part of the game plan, Gane confirmed. And JDS was able to hurt him, before Gane was able to secure the finish. “Yes. Yes yes yes. He was really aggressive with his right hand. He touched my eyes, I don’t know exactly where, and after, he touched a little bit towards my back [of the head].”

In the end, the victory over Dos Santos at the very least turned the  year around for Gane. He’d struggled to make it to the octagon, seeing multiple fights and opponents fall through. “Every time I said it was a bad year, but now, it’s a good year for me.” 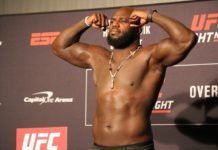