Ciryl Gane proved that the future is here at UFC 256, knocking out former champion Junior dos Santos in the second round.

Former heavyweight champion Junior dos Santos looked to halt the rise of undefeated prospect Ciryl Gane at UFC 256. Not too long ago, dos Santos was on a three-fight win streak and was primed for another shot at the title. Since then, however, he has been knocked out three times by Francis Ngannou, Curtis Blaydes, and Jairzinho Rozenstruik.

Gane is a former Muay Thai fighter who has successfully transitioned to MMA. He won the TKO heavyweight title in Canada in his professional debut, defended it twice, then was signed by the UFC. After two knockouts to start his run there, he defeated Tanner Boser.

Dos Santos ducked down early on and nearly found himself in a standing guillotine, but escaped successfully. JDS landed a smooth two-punch combination. Gane was focused on establishing the kick early on. He went high with one and dos Santos blocked successfully. As dos Santos swung a left hook a kick caught him below the belt, halting the action. Right when they got back to it, Gane threw the same kick but caught the leg this time. He started mixing in body kicks and dos Santos fired a heavy left hand that caught Gane, showing that he’s always one big shot away from ending the fight.

Dos Santos was hunting for the lead left hook, but Gane was staying in kicking range. Gane continued to pepper the body of JDS with kicks and walked through a right hand to initiate a clinch. After the separation, a leg kick stung the Brazilian, then a right jab rocked him. Gane followed him and landed a hard elbow in the clinch that dropped dos Santos and finished him. JDS was unhappy with the stoppage, believing the elbow hit him on the back of the head, but nothing came from the argument. 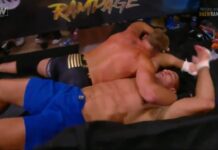 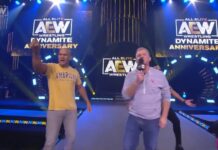