After a decade in the promotion, Charles Oliveira is well aware of the stakes heading into his co-main event lightweight battle with Tony Ferguson at UFC 256.

The fight this Saturday could very well lead the victor to a title shot. Against who is something of a question, although during the UFC 256 virtual media day on Wednesday, Oliveira expressed his belief that champ Khabib Nurmagomedov is truly retired. “I have no doubt in my mind, the champ in the division swore on his father’s grave that he’s not going to fight again, so why would he fight again?”

Which leaves the other side of the equation something of a question mark — though Oliveira has an idea of who could potentially face the winner of his fight for the title. “The only thing I can be sure of is that I’m going to beat Tony Ferguson this weekend,” he stated — but he does expect to then fight one of two names: “Conor and Poirier.”

Conor McGregor and Dustin Poirier fight for the second time next month, at UFC 257. The timing would work, the rankings would support it — if, of course, Khabib truly is retired.

And first, Oliveira has to get by the tough-as-nails Ferguson. And hope that nothing goes sideways prior to fight night. Heading into this rather short-notice co-main event match-up, opponent Tony Ferguson stated on social media that he’d turn down the fight if Oliveira missed weight.

“Tony needs to worry about his own weight,” responded Oliveira. “It’s up to me what i do with my team.”

Ferguson’s comments were also something of a puzzle. While Oliveira has missed weight in the past, he has never missed the mark at lightweight. All of his struggles at the scale came down a division, at featherweight. His last bout at 155lbs did come at a catchweight, but that was after opponent Kevin Lee missed the weight.

In any case, Oliveira, the UFC submissions record holder, heads into UFC 256 in something of a sweet spot. Twenty-six fights in the octagon, fourteen submission wins, a decade in the company, and still just 31-years old.

“I have a ten year history in the UFC. I’ve learned a lot from my mistakes,” Oliveira pointed out Wednesday. And when it comes to Ferguson, “he’s not the boogyman like everyone says.” 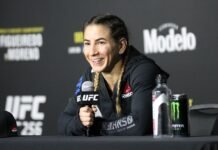