Magomedov was actually the only man to hold a win over the UFC champ; the Russian pair had split their career series at one win a piece.

While Mattos came out with a kick or two, Magomedov almost instantly got the fight down and almost secured the back. Mattos slipped out, and worked his way back to his feet with a little help from the cage. Magomedov, however, stayed on a leg, working to drag Matheus Mattos back down. In the end, Magomedov wound up executing a highlight-reel suplex, and still managed to stay on Mattos. Magomedov was relentless with his grappling and refused to let go of a body lock. Mattos would break free in the final seconds of the round, but it was way too late for him to salvage the first five minutes.

💪 The takedown game of @MagomedovTiger1 is strong!

The #Bellator254 co-main event is LIVE NOW on @CBSSportsNet in the U.S. and with @SkySports in the U.K.#USOHolidays #MMA #Bellator pic.twitter.com/6Cjd6Ea1gX

Magomedov opened with a kick in round two, with Mattos at center. Whether he was looking to counter or score the knockout blow, Mattos wound up a bit like a deer in the headlights as Magomedov was active on the feet, even trying a jumping attack — before again closing the distance and pursuing a takedown. From there, the Russian’s Khabib-like wrestling followed, with some extra tricks on display. With a body triangle in place, Magomedov managed to slide onto the back, then nearly to mount; when Mattos stood up, Magomedov stayed on him, triangle still glued in place. Again, near the end of the round, Mattos would free himself, only to eat a Magomedov elbow just as the bell sounded.

Mattos was almost certainly in need of a finish in round three. Early on, however, he was under siege from the relentless takedowns of Magomedov. That pressure simply would not let up. Magomedov controlled from the back for the bulk of the round. He finished the frame with a body triangle working on a rear-naked choke, and was never in any danger.

Magomedov also very much announced his arrival in Bellator’s bantamweight division with the one-sided victory. 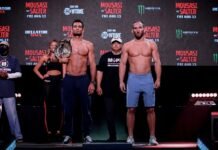