“The Boa Constrictor” Aleksei Oleinik is set to return on that date, taking on recent newcomer Chris Daukaus. The bout was first reported by JACO UFC 2 on social media, after Oleinik revealed that he had recently signed a bout agreement for that date. Just a week ago, Daukaus posted a snapshot of his own bout agreement.

Oleinik (59-14-1) will be in search of win #60 in the fight. At just 43-years young, he’ll also look to continue defying Father Time. The Ezekiel choke specialist began his career way back in 1996, but didn’t arrive in the UFC until 18 years later, making his debut with the promotion in 2014.

The Ukrainian-born Russian now resides in Florida, where he trains with American Top Team. Oleinik holds notable wins over Fabricio Werdum, Mark Hunt, Travis Browne, and outside the UFC, Mirko Cro-Cop and Jeff Monson. He fell to Derrick Lewis in his last bout, however.

Chris Daukaus (10-3) will not have the edge in experience this February. Given that he has fewer fights than Oleinik has losses, that’s a given. At 31-years old, however, he’s more than a decade younger than Oleinik. Daukaus made his octagon debut back in August, defeating Parker Porter, then earned his second UFC win against Rodrigo Nascimento in October. Daukaus’ brother Kyle also fights for the UFC, competing in the middleweight division.

The UFC’s February 20, 2021 event does not yet have an official name, main event, or location announced. The following fights have been reported for the card: 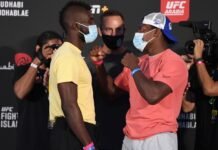 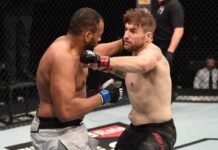