Paul Craig left no room for uncertainty in his rematch with Shogun Rua at UFC 255, stopping him with strikes in the second round.

Shogun Rua and Paul Craig had their rematch at UFC 255 following up their draw from just over a year ago. For Shogun, that draw is one of the few blemishes he’s had over the past five years. The former champion and PRIDE legend is 5-1-1 over his last seven fights, showing that there is still something left in the tank.

Craig has started to put things to together after a hot and cold start to his UFC career. Since going 3-4 after signing with the promotion, the Scottish fighter has two first-round stoppages and the aforementioned draw against Shogun.

Craig started the fight by marching across the Octagon and slamming home several leg kicks. Craig went high with a kick and Shogun darted in with a combination that caught the chin of Craig. Craig popped out a jab then shot hard for a takedown and got Shogun on his back into half guard. Shogun immediately began working for a sweep and used it to stand up, but Craig held on to a headlock and dragged Shogun back down then hit a butterfly sweep to reclaim top position. Shogun fought back to his feet then was taken down again by another double leg. This time, Shogun’s sweep was completed as he took half guard. Shogun held top position for the remainder of the round, resisting a sweep from Craig.

Shogun was the aggressor to start round two, landing a sharp left hook early on. Craig landed a few jabs and then a few leg kicks. Shogun went over the top and landed another right hook then Craig ducked under a punch and took the fight to the ground again. Craig started working for a choke, but couldn’t get it as Shogun worked his way to his feet. Craig went right back to the takedown with a single leg, took the back as Shogun was resisting and began unloading heavy blows while postured up. 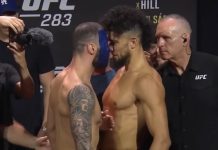 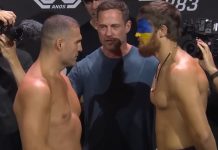