Brandon Royval has been one of the feelgood stories in MMA thus far in 2020.

Returning to the octagon at UFC 255 on Saturday night, Royval (12-4) will be looking for his third consecutive win in the UFC’s flyweight division. Thus far, he’s taken out Tim Elliott, Kai Kara-France, and collected some bonus money in the process. Next up, another top 125lb’er in Mexico’s Brandon Moreno.

“I have to fight all the coolest flyweights,” Royval exclaimed during the UFC 255 media day this week. “I had to fight Tim Elliott, Kai Kara-France, and Brandon Moreno and as a fan of this sport, I feel like I wouldn’t even be rooting for me in these fights, like fighting all these cool guys.”

It’s hard not to like Royval, frankly. His enthusiasm in infectious, and his quick rise into the top ten of the flyweight rankings has been inspiring. Not one to trash talk an opponent, Royval appeared excited just describing Moreno this week. “He’s so good. And he’s good everywhere. And he’s just like— he brings it, he has that Mexican heart and that Mexican mentality of like, move forward, throw bombs and take risks,” Royval said. “I just have an amazing opponent in front of me and an amazing person to kind of stay motivated. And I don’t know, I honestly just can’t believe all this.”

In fact, “general disbelief” is how Royval later described his rise. “When people say you’re number six in the world, I’m like, ‘Yeah, yeah right.'” Perhaps selling himself a bit short — there’s no question Brandon Royval is a talented fighter — he added that his success has been thanks to “somewhat dumb luck too. I just feel like I’ve been in the right places at the right time, and it’s all kind of worked out.”

If it keeps working out, he may just find himself in the title hunt soon. 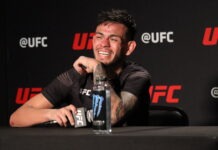 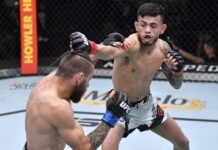