When Robbie Lawler dropped off the UFC 255 card, where he was expected to face Mike Perry, a sizeable hole was opened. Stepping in, however, was Tim Means — keeping the underlying theme of the fight, which pretty much screams “violence.”

Means (30-12-1, 1NC) has been around the sport of MMA for over 15 years. He’s as game as they come. No doubt, given he stepped into a fight with Mike Perry (who, it should be noted, badly blew weight at Friday morning’s weigh-in).

With Mike Perry, of course, comes what can only be described as a sideshow at this point. Controversy. Weird corner choices. Once again, girlfriend Latory Gonzalez will be in Perry’s corner. So will one of his buddies. Means, however, isn’t concerning himself with any of that. “That’s not my business. My business is to be ready on my own and and go from there,” he told Cageside Press during the UFC 255 media day.

Asked for his opinion on his opponent, Means remained diplomatic. “My opinion is he has a lot of heart,” the “Dirty Bird” said. “He’s very durable, and he’s a strong guy, so I have to make his big punches miss and pick him apart from the outside, and get a finish later in this fight.”

Deep waters it is, then. When it comes to continuing to train and fight during the coronavirus pandemic, however, Means opened up. The lack of an audience, he said, doesn’t have much of an impact on him. “The experience without the audience is the same once the cage gets locked. You get punched in the face, you don’t realize there’s no people out there at all, only the dude trying to hurt you.” But training is another story, apparently.

“Training through the pandemic has been a little tricky, based on the fact that we have to make sure all of our athletes and training partners are healthy,” explained Means. “And not just that we’re healthy at home, but we’re not sending stuff back to our families, or we’re healthy at work.” At the end of the day, when it comes to his gym, “we have to think about everybody as a whole in this.”

That approach is something that could be applied on a larger scale. As Means sees it, “I think the world in general has lost sight of that, that we’re all in this together. And if we’re not helping one another, we’re each other’s worst enemy.”

Despite the pandemic being “tricky,” however, Means added that “it’s still a hell of a time to get in a fistfight.” 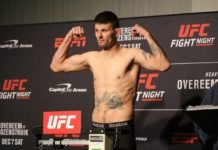 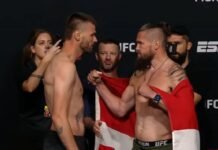