In a typical Darren Elkins performance, the UFC veteran snapped a four-fight losing streak with an impressive submission victory over Eduardo Garagorri at UFC Vegas 13.

After more than a decade in the promotion, Darren Elkins has felt the ups and downs of the UFC. Previously on a four fight losing streak, “The Damage” isn’t the kind of guy anyone is going to take lightly, regardless of his recent run. The 36-year-old had 22 career UFC bouts ahead of UFC Vegas 13, battling a bevy of top-tier veterans throughout his career. Most recently Elkins lost a unanimous decision to Nate Landwehr last May.

Eduardo Garagorri, on the other hand, had two career UFC bouts before Saturday night. Coming off of the first loss of his career, the 31-year-old representing Uruguay was getting back in the Octagon after nearly a year away. Garagorri was 1-1 in the UFC, earning a unanimous decision victory over Humberto Bandenay in August of 2019.

Elkins started the action with an early takedown, succeeding in getting the fight to the floor in the opening minute. Garagorri worked hard to get back to his feet, but was once again quickly dragged to the canvas by Elkins. Elkins continued to pressure Garagorri and, while he was able to get up again a few times, the fight was being fought on Elkins’ terms: in the clinch and on the ground.

Garagorri was able to work the fight back to the feet in the center of the Octagon in the final minute of the first round. He threw and seemingly landed a head kick on Elkins, but somehow “The Damage” was able to hold on to the kick and take Garagorri down, ending the round in top control.

The gameplan from Elkins was more of the same in round two. But he was eating more shots from Garagorri while shooting for takedowns early on in the second stanza. Despite eating some heavy shots, Elkins was able to get Garagorri back to the ground, tirelessly working from the top. Garagorri once again worked his way to his feet, bloodying Elkins below his left eye while battling in the clinch. Both men seemed happy to end the round on the feet, trading shots until Elkins landed his seventh takedown of the fight, ending a second straight round in top control.

Back and forth through ✌️

Likely needing a finish, Garagorri continued to land solid single strikes to the face of Elkins in the early moments of the final round. A powerful combo from Garagorri sent Elkins stumbling back, and the Uruguayan looked to capitalize. Unable to land another decisive blow, Garagorri was quickly wrapped up in Elkins clinch.

In no time at all, Elkins had taken Garagorri’s back, secured the body triangle, and sunk in the rear-naked choke. Garagorri quickly tapped, suffering the second loss of his career. The win was Elkins’ first since January of 2018 and his third career UFC submission.

Turning it on late, @DarrenElkinsMMA got the tap in Round 3 💪 #UFCVegas13 pic.twitter.com/4BY4U3UESK 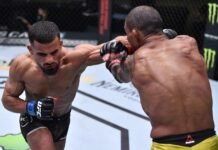 ONE on TNT II Results and Video