Mariusz Ksiazkiewicz makes his long-awaited return to the cage on November 10 when he battles Mario Sousa at Dana White’s Contender Series. “The Iron Pol” found out about this opportunity last year and spoke about why the fight got pushed close to a year later.

“So around December … my manager messaged me that he was in talks about getting me on Contender Series,” Ksiazkiewicz told Cagesie Press. “They were planning on having it in the spring. We signed the contract way back in February, actually, for Contenders. And I guess in February, they changed it for the summer. So originally my fight was supposed to be July 14, I believe, and then got pushed back to September 29. And, you know, here we are training for November 10. So it’s been like a nine-month camp.”

Ksiazkiewicz (8-0) last fought in November 2019 when he submitted Guilherme Miranda in the first round at Teofista: Fight For The Troops. It was the seventh stoppage victory in eight career fights for the Canadian.

Sousa (11-1) is also coming off a first-round submission victory over Mauricio Queiroz at Metanoia FC 4 in Oct. 2019, which pushed the Brazilian’s winning streak to four straight. The 24-year-old’s lone career loss came in 2018 against DWCS vet Leonardo Silva at MMA Brazil Tour 1.

The Winnipeg Academy of Mixed Martial Arts product likes the style matchup, even though his opponent has a significant height advantage.

Ksiazkiewicz looks to join TJ Laramie as just the second Canadian to win a UFC contract on DWCS. The 31-year-old expects to finish his opponent on November 10 and achieve that feat.

“Maybe there will be a little bit of a feel out process at first just to get used to his range,”  Ksiazkiewicz said. “But I feel that I’m going to figure it out really quick and you know, first, second-round finish is what I see right now.” 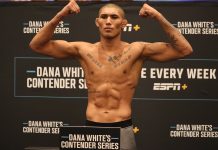